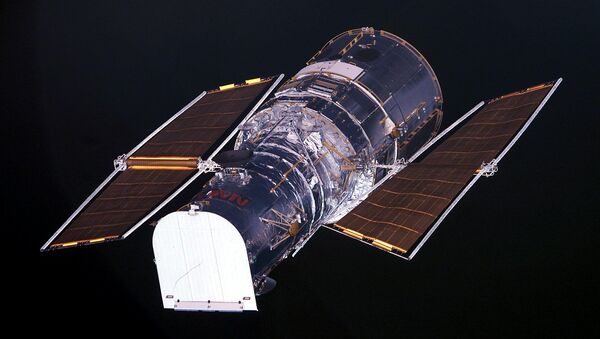 NASA announced that the Hubble Space Telescope has enabled astronomers to uncover a moon on the third largest dwarf planet located in the Kuiper Belt.

Science & Tech
Auroras on Uranus: Hubble Captures Bursts of Wind on Gas Giant
WASHINGTON (Sputnik) — The Hubble Space Telescope has enabled astronomers to uncover a moon on the third largest dwarf planet located in the Kuiper Belt, the National Aeronautics and Space Administration (NASA) announced in a press release.

"With this discovery, most known dwarf planets in the Kuiper Belt larger than 600 miles across have companions," the release stated on Thursday. "These bodies provide insight into how moons formed in the young solar system."

The images show that the moon is gravitationally bound to the tiny planet named "2007 OR10" because it moves with the planet, as seen against a background of stars, the release noted.

The discovery of moons around planets in Kuiper Belt has led scientists to theorize that frequent collisions of celestial bodies were instrumental in the formation of the solar system.

The dwarf planet, about three times further from the Sun than Pluto, is about 950 miles across and the moon is estimated to be 150 miles to 250 miles in diameter, according to the release.