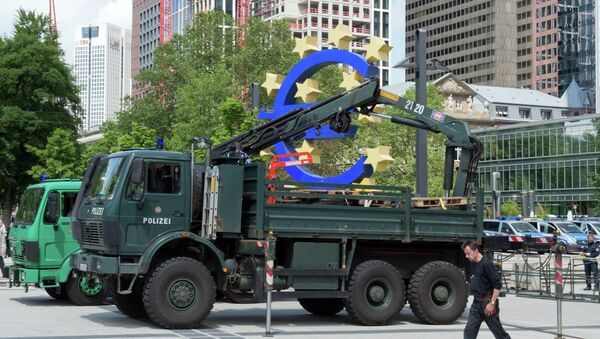 Czech Prime Minister Bohuslav Sobotka said earlier this week that his country needs to set a date for adopting the euro. According to former Czech lawmaker Jiří Vyvadil, the country does not need to accelerate the adoption of the European currency.

"Sooner or later, we will have to answer a question… when will we be able to adopt the current European currency?" Sobotka said Tuesday, as quoted by the Associated Press.

He said that the parliamentary election in October would be the right time to start a discussion on the matter.

Czech President, Ruling Coalition Fail to Mend Rift Over Finance Minister
Sobotka also said that after Emmanuel Macron’s victory in the French presidential election and September’s election in Germany, his country might find itself on the periphery of the European Union.

Despite the fact that the Czech Republic is officially committed to joining the eurozone, the previous government, as well as the current cabinet led by the Social Democrats, has not set a target date for adopting the euro. Moreover, there has been strong public opposition against the European currency in the country.

Commenting on Sobotka’s statement, Jiří Vyvadil, a former Czech lawmaker and deputy law minister, said that the government currently cannot make any pledges because the "results of the October elections will be unpredictable."

"First, we have to wait for the results of the election. No one can predict now who will win, Sobotka’s Social Democrats or the ANO 2011 populist party led by Finance Minister Andrej Babiš. Intense political struggle is now underway, and the adoption of the euro is the stumbling block in this struggle. Sobotka is an avid supporter of the euro while Babiš is against," Vyvadil said in an interview with Sputnik Czech.

According to Vyvadil, it is no surprise that Sobotka has called to accelerate the adoption of the euro in the Czech Republic because the prime minister hopes to win more votes, following the French and Germany elections.

Eurozone Inflation, Growth Accelerate, Defying Political Fears
"He believes that as a result he will be part of a new trend, part of new, more integrated Europe. Sobotka wants his country to be in the forefront of European integration," the politician argued.

Answering the question on whether Prague has the chance to make it, Vyvadil underscored that public opposition against the currency change is strong and currently the Czech Republic is possibly the "most skeptical EU member in terms of adopting the euro."

"Our politicians should not ignore public opinion. Only 15-20 percent of the Czech population support switching to the euro. We have the koruna and the economic advantages of the situation are evident," Vyvadil pointed out.

According to him, a national currency gives the Czech government a greater scope for maneuvering within the EU.

"As the majority of Czechs, I believe that the country does not need to accelerate its integration in the EU. It is what it is, and this is good. The Czech Republic uses the advantages from its EU membership for its interests, including free trade, the freedom of capital movements and travel. We don’t need further EU integration and centralization," Vyvadil said.

Greek Debt Turmoil Still Weighs on Euro Area Economic Growth
Commenting on the possible implementation of the multi-speed Europe idea, Vyvadil noted that the majority of Czech would not like to be part of the "European core" proposed by France and Germany.

"There are no such public ambitions in the Czech Republic. I don’t take seriously Sobotka’s statement on the euro adoption. He brought up this issue as an argument in the struggle with Babiš. He believes it’s his trump card, but I don’t think so," the politician concluded.