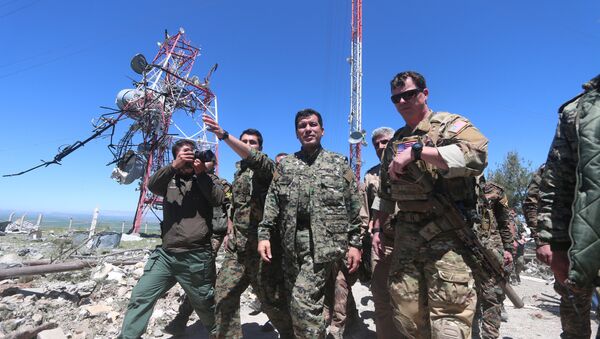 According to the deputy assistant secretary of State for Europe and Eurasia, the US decision to arm Kurds for the offensive to retake Raqqa is purely tactical.

Washington Chose Kurds for Raqqa Op Since They 'Cost Less Than Turkish Soldiers'
WASHINGTON (Sputnik) — The US decision to arm Kurdish fighters for the offensive to retake the city of Raqqa is purely tactical, since they are the only group within the Syrian Democratic Forces that are in position and capable of defeating Daesh, Deputy Assistant Secretary of State for Europe and Eurasia Jonathan Cohen stated on Wednesday.

"Our relationship is temporary, transitional and tactical," Cohen told guests at the Middle East Institute think tank. "They are the only force in that part of Syria… that is capable of moving in the near term to seize and liberate Raqqa."

Turkey considers the Syrian Kurdish fighters, known by the acronym YPG, as terrorists on par with Daesh, because of YPG ties with the Kurdistan’s Workers party (PKK) terrorist group that is fighting to carve out a Kurdish state from Turkey.

Turkish opposition to the recent US decision to arm the YPG was a major point of contention in Tuesday’s White House summit between President Donald Trump and Turkish President Recep Tayyip Erdogan.