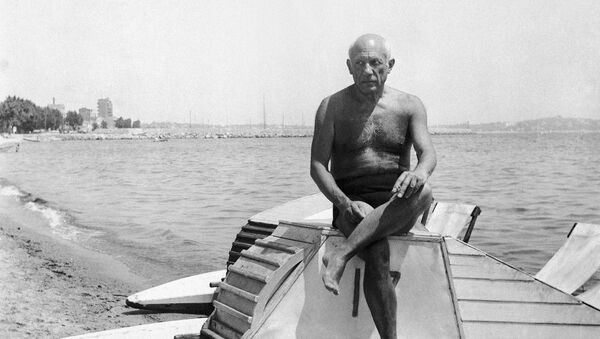 © AP Photo
Subscribe
A painting by world-renowned Spanish artist Pablo Picasso that was previously confiscated by the Nazis has sold at auction for $45 million.

Picasso's 1939 painting "Femme assise, robe bleu"' (Seated Woman in Blue Dress), depicting artist and photographer Dora Maar, was sold on Monday by Christie's auction house in New York City, for $45,047,500 (40.9 million euros), a figure said to be toward the upper end of the original estimate, according to Deutsche Welle.Pablo Picasso

​Completed just before the outbreak of World War II, the portrait, one of many by Picasso of his then-lover and notable muse Marr, was seized by the Nazis alongside thousands of other artworks following their occupation of Paris.

Stored in the Jeu de Paume building in Paris during the Nazi occupation, the artwork was recovered while in the process of being transferred to Berlin in a daring raid that became the subject of a 1964 movie "The Train," directed by John Frankenheimer.

Parisian art dealer Paul Rosenberg was said to have paid 50,000 francs for the painting in early 1940. The painting was taken by the Nazis after the Rosenberg family successfully escaped France later that year.

Built in 1861 to house tennis courts, the stone Jeu de Paume structure in Paris is now a museum.