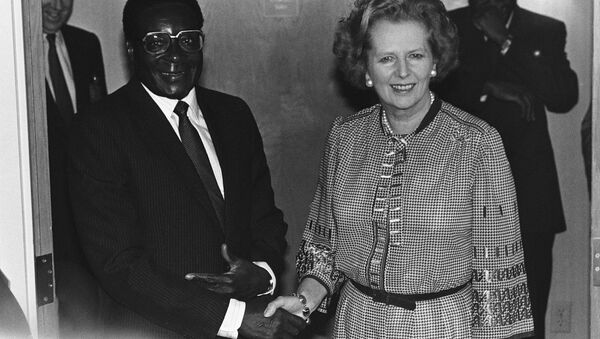 © AP Photo / Dave Caulkin
Subscribe
A Freedom of Information (FOI) request has revealed that British officials turned a blind eye to the massacre of thousands of dissidents in Zimbabwe in order to protect the UK's economic and political interests.

Thousands of documents obtained under a Freedom of Information request by Dr. Hazel Cameron, a lecturer in international relations at the University of St. Andrews in Scotland, has uncovered that British officials in London and Zimbabwe were aware of the atrocities in the 1980s.

In an interview with the Guardian, Dr. Cameron said that the British could have stopped some of the things that were taking place in Zimbabwe; instead they decided to further their own interests.

"The British government could have influenced authorities in Zimbabwe, but put political and economic interests first… There were steps they could have taken but they chose not to," Cameron told the paper.

In 1983, Mugabe decided to launch an offensive in Matabeleland, home of the country's Ndebele ethnic minority and stronghold of political rival Joshua Nkomo. Over the next nine months, the Fifth Brigade of the new Zimbabwe National Army tortured and raped tens of thousands of unarmed civilians. Sources have estimated that during this time between 10,000 and 20,000 people were killed and many suffered severe physical and psychological damage.

However the British government was more concerned with furthering their own political and economic interests, according to the recently released documents.

"Zimbabwe is important to us [Britain] primarily because of major British and western economic and strategic interests in southern Africa, and Zimbabwe's pivotal position there," Robin Byatt, the British high commissioner in Harare, said in a report from 1983.

"Other important interests are investment and trade… prestige, and the need to avoid a mass white exodus. Zimbabwe… [also] is a bulwark against Soviet inroads," Byatt added.

Byatt also claimed that the Fifth Brigade, who was the group that committed many of the crimes were not as brutal as made out to be.

"The behavior of the Fifth Brigade has certainly been brutal but it is [the] impression [of senior British military officials] that they are not out of control," he wrote.

Jill Byatt, wife of the former high commissioner, told the Guardian that this type of criticism is misplaced.

"It was very important to keep good relations… Aggressive criticism would have got us nowhere. It would just not have worked," she said.

000000
Popular comments
The plan is to defile the West, then destroy it. I'm glad to see Thatcher getting some of the legacy she richly deserves. The same is happening to Reagan. And I don't consider either to be conservative. Both were establishment globalists,similar to Merkel or Bush.
stop the NATO wars
17 May 2017, 14:56 GMT
000000
The kind of people saying, Assad must go, today. Change U.K to Russia. The latter following own interest. Media guided NATO opinion will explode. Demanding war. The scream leaders are strait away retiring to pursue other interest in true U.K/Europe tradition, ones a fan hitting, doing her thing.
demooij
17 May 2017, 15:35 GMT
000000
Newsfeed
0
New firstOld first
loader
LIVE
Заголовок открываемого материала
Access to the chat has been blocked for violating the rules . You will be able to participate again through:∞. If you do not agree with the blocking, please use the feedback form
The discussion is closed. You can participate in the discussion within 24 hours after the publication of the article.
To participate in the discussion
log in or register
loader
Chats
Заголовок открываемого материала
Worldwide
InternationalEnglishEnglishMundoEspañolSpanish
Europe
DeutschlandDeutschGermanFranceFrançaisFrenchΕλλάδαΕλληνικάGreekItaliaItalianoItalianČeská republikaČeštinaCzechPolskaPolskiPolishСрбиjаСрпскиSerbianLatvijaLatviešuLatvianLietuvaLietuviųLithuanianMoldovaMoldoveneascăMoldavianБеларусьБеларускiBelarusian
Transcaucasia
ԱրմենիաՀայերենArmenianАҧсныАҧсышәалаAbkhazХуссар ИрыстонИронауОssetianსაქართველოქართულიGeorgianAzərbaycanАzərbaycancaAzerbaijani
Middle East
Sputnik عربيArabicArabicTürkiyeTürkçeTurkishSputnik ایرانPersianPersianSputnik افغانستانDariDari
Central Asia
ҚазақстанҚазақ тіліKazakhКыргызстанКыргызчаKyrgyzOʻzbekistonЎзбекчаUzbekТоҷикистонТоҷикӣTajik
East & Southeast Asia
Việt NamTiếng ViệtVietnamese日本日本語Japanese中国中文Chinese
South America
BrasilPortuguêsPortuguese
NewsfeedBreaking
13:03 GMTDalit Man Lynched, Tortured at Farmers' Protest Site for Desecrating Holy Book, Accused Surrenders
13:03 GMTUnions Threaten to Strike Over UK Plans to 'Undercut' Business by Easing Rules For EU Hauliers
12:54 GMTRussia Reports Record Domestic Gas Consumption Amid Europe’s Supply Shortages
12:04 GMTTeen With Lego Gun Triggers Police Operation in German Town
12:01 GMTMachete-Wielding Man Injures Four People in Canada's Calgary
11:38 GMTRussian Deputy Prime Minister Not Ruling Out Repetition of Energy Crisis in Europe
11:24 GMTNorth Korean Website Slams 'Squid Game' as Showing 'Hell-Like Horror Where Only Money Matters'
11:07 GMTDeath Toll From Kandahar Mosque Bombing Rises to 63
11:02 GMTFrench Politician: US Has Moral and Legal Obligation to Unblock Afghan Assets & Let the Nation Be
10:59 GMT‘Killed Serving the People’: UK Media Shows Rare Display of Cross-Party Unity in Tribute to Dead MP
10:50 GMTIs Russia in Danger of Running Out of Gold Deposits?
09:08 GMTUS-Greek Bases Pact Signals Bid to Pressure Turkey, Dominate East Mediterranean
09:02 GMTAustrians Invited to Presidential Palace for COVID-19 Shots
09:00 GMTNASA's Lucy Mission Blasts Off to Examine Trojan Asteroids
09:00 GMTPremier League: Five Biggest Games of Matchweek Eight
08:55 GMTUK Police Ordered to Immediately Review MPs' Security Arrangements After Fatal David Amess Stabbing
08:30 GMTSeveral Dead and Dozens Injured: What Was Behind Thursday's Bloody Events in Lebanon?
07:33 GMTISS Crew Was Woken Up by Siren at Night
07:16 GMTAnother Day, Another Blunder: Psaki to ‘Choose Words More Carefully’ After Ethics Watchdog Complaint
07:12 GMTNetflix Fires Organiser of Trans Employee Walkout for Leaking Internal Documents, Reports Say