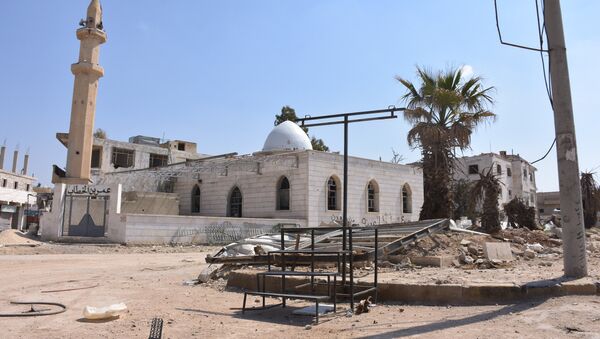 The Cairo platform of the Syrian opposition criticized the Astana memorandum on de-escalation in Syria and insisted any decision should be of UN nature.

Astana Opposition Platform Aims to Create Group to Support Syria Safe Zones Deal
GENEVA (Sputnik) — The Cairo platform of the Syrian opposition criticizes the recently-reached Astana memorandum on de-escalation in Syria and insists any decision on the settlement in the country should be of UN nature, the head of the platform's delegation, Firas Khalidi, told Sputnik Tuesday in Geneva, where the new round of intra-Syrian talks kicked off earlier in the day.

"We demand that any agreement on Syria to be of UN nature and not coming from the countries that are parties to the conflict," Khalidi said.

At the latest Astana meeting on Syria on May 3-4, three ceasefire guarantor states — Russia, Turkey and Iran — finalized and signed a memorandum on establishment of four safe zones in Syria. The four zones span the northwestern Idlib province and parts of the neighboring Latakia, Hama and Aleppo, the north of the central Homs province, Eastern Ghouta near Damascus, as well as southern Daraa and Quneitra regions. The memorandum came into force on May 6.

"Contrary to what the UN envoy said, we do not see a positive reflection from Astana on Geneva…. We do not think that any unilateral action is in Syria's favor unless it comes as a complete basket of political solutions that includes solving all the major issues of security, constitution and governance," Khalidi said.

Geneva is currently hosting the sixth round of intra-Syrian talks, mediated by the United Nations. During the last round, Staffan de Mistura specified the agenda as four "baskets" — counterterrorism, constitution, elections and governance. This round is expected to focus on constitutional matters as key for resolving other issues.