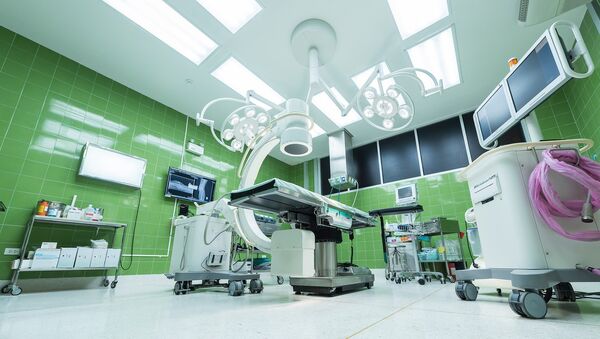 CC0 / Pixabay /
Subscribe
International
India
Africa
Spinal surgeries can now be performed with the help of the augmented reality software. A company called Scopis has released a platform designated to aid surgeons during operations. Radio Sputnik discussed the issue with Bartosz Kosmecki, CEO & Founder of Scopis Inc., a leader in medical augmented reality and hybrid navigation.

“In spinal surgery fixation of the vertebrae is a vital element. The vertebrae are fixed with screws and Microsoft’s HoloLens headset helps determine the correct positions of the screws that hold the vertebrae together,” Bartosz Kosmecki said.

“So we have integrated Microsoft HoloLens to display the position of the screws so that the surgeon can find them faster with greater accuracy and less radiation,” he continued.

Surgeons normally use a lot of radiation to find the right position for the screws.

When asked if the HoloLens was similar to the Google Glass project, which is basically glasses one wears on his face, Kosmecki said that HoloLens is a “mixed reality platform” which projects holograms on the patient.

Science & Tech
'Living, Tissue-Like' Soft-Bots Could Be Used in Surgery, Military - MIT
It is essentially an extension of the already existing navigational platforms which are officially approved and currently used in more than 50 countries worldwide,” he noted.

The platform itself consists of a medical computer where one can download CT image data and determine the exact positions of the screws.

“It is a highly precise measurement system, a stereoscopic camera, which tells the software where exactly the vertebrae are located. This camera also sees the position of the HoloLens itself, which communicates wirelessly with the system.”

When asked whether doctors need special qualifications to operate this software and if it was already available on the market, Bartosz Kosmecki said that a certain degree of medical training was certainly required.

As for the second question, he said that they were now at a very late stage of development of this system and after it has been official certified, they expect to see surgeries using this technology already before this year is out.

Science & Tech
Robotic Surgery Offers Less Numbers of Surgery and Greater Ability
When asked what if, in light of the recent massive hacking outbreak, the very same thing happens during an operation using this computer-based HoloLens technology, Kosmecki said that the computers they use are not connected to the internet and, therefore, are not affected by such attacks.

Speaking about other applications for the HoloLens system, Bartosz Kosmecki said that it could also be used to locate tumors so that surgeons can find them and deal with them faster.

“With this system we managed to improve the visual capability of surgeons by providing them with HoloLens holographic glasses,” he concluded.

Dubbed the Holographic Navigation platform, it is designed specifically to work with Microsoft HoloLens mixed- reality smart glasses. With its help, surgeons can see mixed-reality overlay right on the patient.

The platform helps improve the accuracy of operations and reduce surgery time. It also helps lower the radiation exposure typical for such procedures.