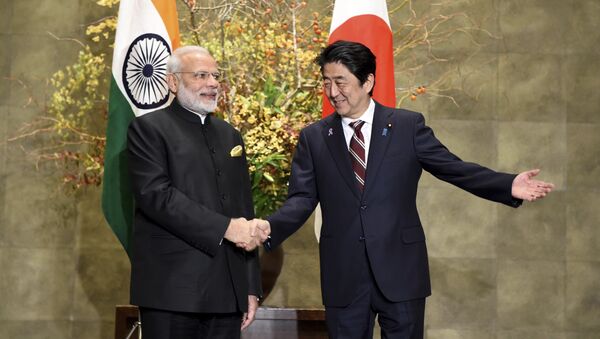 NEW DELHI (Sputnik) — The pact was signed in the presence of Indian Prime Minister Narendra Modi and Japanese PM Shinzo Abe when Modi visited Japan in November 2016. The bill will now be placed in the House of Councilors.

After the clearance of the Diet, Westinghouse Electric — a subsidiary of Japanese firm Toshiba — can supply nuclear power equipment to India for setting up six units of AP-1000 (6 x 1208 MWe) reactors at Kovvada in southern India. However, due to heavy losses in Toshiba's nuclear business, it is not clear whether operationalization of Indo-US nuclear deal will meet the June deadline. Apart from this, techno-commercial aspects of the six units of AP-1000 (6 x 1208 MWe) reactors has not been completed till now which is essential for finalization of the deal.

"Japan has a lot of defense technologies and India, of course, has a great use of these technologies because we are attempting to have local manufacturing in India," Jaitley had said. He said that foreign companies need to be incentivized to set up a manufacturing base in India.

"Given the context of the visit, the focus was not really on issues related to defense. But what Jaitley said in Japan is an indication of a refreshingly new approach to putting our own house in order as well as strengthening India-Japan ties in a more meaningful manner than has been the case until now," said Amit Cowshish, former financial advisor to the defense ministry.