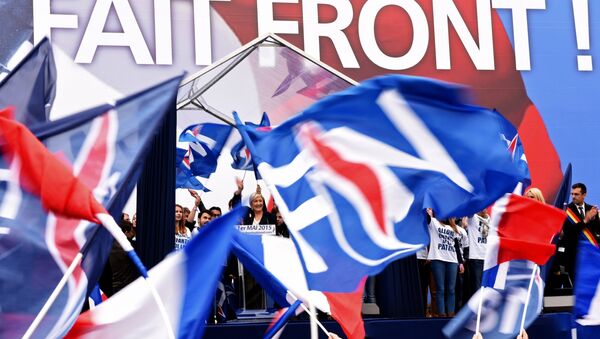 © Sputnik / Galina Azule
/
Go to the mediabank
Subscribe
International
India
Africa
FN member David Rachline says that FN is the only trustworthy opposition force to stand against the policies initiated by Emmanuel Macron following partial absorption of the Socialist Party and appointment of LR member as the next prime minister.

MOSCOW (Sputnik) – France’s National Front (FN) is the only trustworthy opposition force to stand against the policies initiated by new President Emmanuel Macron following partial absorption of the Socialist Party and appointment of The Republicans' (LR) member Edouard Philippe as the next prime minister, FN member David Rachline told Sputnik on Tuesday.

"The National Front is now the only credible opposition to this policy. A policy, not to forget, that is unfortunately more elaborated in Brussels than in Paris," Rachline, who used to be the campaign manager of ex-presidential hopeful Marine Le Pen, said a day before the announcement of the French government members.

Rachline pointed out that Macron's decision to name Philippe as the prime minister was an attempt to undermine the LR rows, which was part of a broader goal of dismantling French traditional left- and right-wing political forces.

Marechal-Le Pen's Retirement May Cost French National Assembly Seats to FN
However, the FN member believed that Macron's policy would remain the continuation of those traditional policies with only minor changes.

"The fact is that [Macron] does not want to change politics at all. The French will soon realize it — he will continue the policy carried out alternately by the left and the right forces for decades, probably in a more cosmetic way," Rachline noted.

Speaking about possibility of The Republicans' members joining Macron's government, Rachline considered it possible. He also highlighted that the supporters of the right-wing party would "feel betrayed" after such a move, taking into account massive anti-Macron campaign led by the LR party.

On Monday, Macron announced that Philippe, the mayor of Le Havre, would serve as new prime minister of the country.

The Socialist Party, the nation’s largest left-wing group, suffered a blow after its candidate Benoit Hamon did not make it into the second round of presidential election, with many of its members seeking to join Macron's La Republique En Marche party.

On May 10, Hamon said he would start a new movement after the nation's legislative election in June.

On the same day, Francois Baroin, head of The Republicans parliamentary election team, urged party members against defections to Macron's camp as the legislative elections approached. The two-round voting is scheduled for June 11 and June 18.