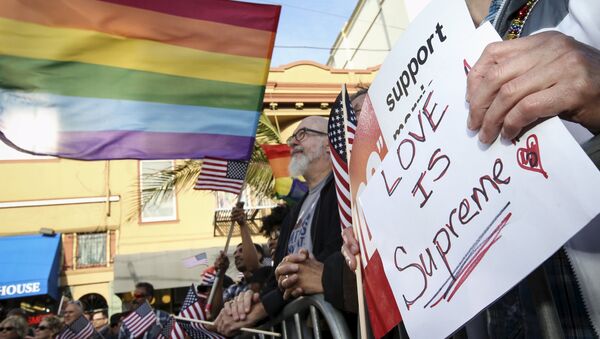 Support for gay marriage in the United States has reached an all-time high, according to a new poll released by Gallup on Monday.

US Judge Sends Clerk Refusing to Issue Same Sex Marriage Licenses to Jail
The poll, which was conducted from May 3 to 7 among 1,011 adults, found that 64 percent of respondents believe that same-sex marriages are correctly legal, up from 61 percent last year.

The amount of support has been consistently rising year after year, since Gallup began asking about it in polls in 1996, when support was at just 27 percent.

“In 2004 — weeks before gay weddings took place in Massachusetts after it became the first state to legalize same-sex marriage — less than half of Americans (42%) felt such unions should be legally valid. Majority support for gay marriage would not come until May 2011, about a month before New York became the sixth state to legalize it,” Gallup reported. “Since then, support for legal same-sex marriage has steadily climbed, with consistent majorities in favor of it since late 2012.”

The difference across party lines was pretty stark, however, with 74 percent of Democrats and 71 percent of independents supporting gay marriage. Meanwhile, less than half of Republicans shared that view, with just 47 percent expressing their support —  though even among the GOP, support is the highest that it has ever been.

“Republicans' support for gay marriage is also at a new high and could trend toward majority support in the near future,” the pollsters noted.

In conclusion, Gallup reported that “though the Supreme Court has settled the legality of same-sex marriage, a third of Americans are opposed to it.”