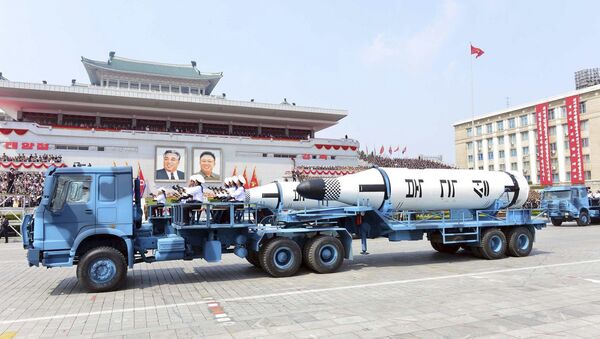 © AP Photo / Korea News Service via AP
Subscribe
Days after South Korea elected a new president who might be favorable to better diplomatic ties with Pyongyang, North Korea launched a medium-range ballistic missile that might accommodate a large nuclear warhead into the Sea of Japan.

“North Korea’s latest successful missile test represents a level of performance never seen before from a North Korean missile,” aerospace engineer John Schilling wrote on 38 North, a website dedicated to North Korea security topics. Despite Hwasong-12’s classification as a medium-range missile, it could have allowed North Korea to test subsystems of ICMBs.

US President Donald Trump’s frequent declarations about “solving” the North Korean “problem” may have forced Pyongyang’s hand into accelerating ICBM development. “The possible testing of ICBM subsystems in this low-key manner may be a North Korean hedge” against the prospect of escalation with US forces, Schilling said.

It could represent significant progress toward the nation’s goal of reaching greater ICBM capabilities, according to various experts. The most recent test was “not consistent with an intercontinental ballistic missile,” US Pacific Command said in a statement. But David Wright of the Union of Concerned Scientists estimated the projectile’s range to be 2,800 miles.

The “Korean-style” missile was “capable of carrying a large, heavy nuclear warhead,” North Korean state-media outlet KCNA reported. Based on the missile’s altitude and flight time, the DPRK may have launched a “new type of missile,” Japanese Defense Minister Tomomi Inada said.

The missile originated in Kusong, North Korea, before flying roughly 490 miles, where it landed in the Sea of Japan, just 60 miles from Vladivostok, Russia.

Technology used by North Korea to send satellites out of the atmosphere may be how the DPRK has covertly developed its ICBM capability, Military.com reported. Washington “should never expect” the leadership of North Korea to abandon its nuclear program, according to KCNA.

Pyongyang has been nothing short of a “flagrant menace,” a White House statement said, “for far too long.”