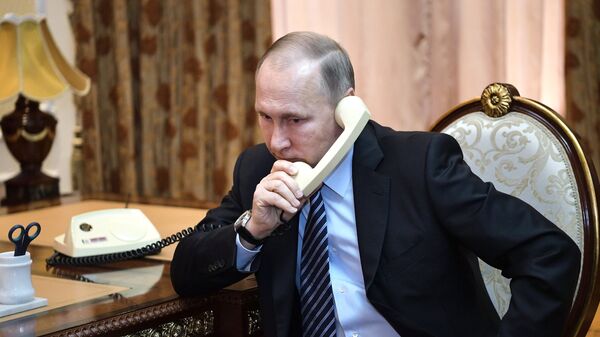 MOSCOW (Sputnik) —  A relevant decree was published on the government's legal information portal on Monday.

"Approve… the strategy of the Russian Federation's economic security for the period until 2030. The Russian government is instructed to develop in 3 months the measures of organizational, regulatory, legal and methodological nature required to implement the Russian Federation's economic security strategy until 2030 and ensure their implementation," the document said.

The strategy of Russia's economic security until 2030 envisions the improvement of the mechanism of response measures in case of sanctions of foreign states, according to the document.

"Improvement of the response measures mechanism in case of application by foreign states and international organizations of sanctions against Russian legal entities and economic sectors of the Russian Federation," the document said.

In line with the strategy, threats to Russia's economic security include discriminatory measures against the key sectors and the growth of the conflict potential in the zones of Russia's interests.

The document named the high level of corruption in Russia, ineffective public administration, high dependency on commodity sectors of the economy and excessive environmental requirements as factors which negatively influence Russia’s economic security.

A growing social income differentiation within the Russian nation and the unequal development of the country’s regions were also listed as threats to the country’s economic well-being.

"At the present stage of global development, the clear signs of unipolar world decay are starting to manifest itself. Moreover, the process of transition to multipolarity is accompanied by the growing geopolitical instability and volatility of the world's economy, a dramatic escalation of the global competition. There is a tendency of redistribution of influence toward new economic and political development centers. The significant changes take place in the fields of international law as well as in the political, military and economic spheres," according to the document.

The strategy also stresses the increased influence of changes to the global environment’s on Russia’s economic security.

"The factors, related to global climate change and its capability of causing shortages of food and fresh water, exacerbate the competition for the access to renewable resources, including the resources of the Artic and Antarctica, the waters of the Arctic Ocean, are starting to significantly influence the state of the economic security," the strategy read.

In order to alleviate the impact of threats on the country's economy, such measures as the priority development of the Russian regions of Kaliningrad, the Russian Far East and Crimea were designated in the strategy.

The document also read that one of the measures, aimed at the improvement of economic security, is the expansion of partnership and integration ties within the framework of the Commonwealth of Independent States (CIS), BRICS (Brazil, Russia, India, China, South Africa) and Shanghai Cooperation Organisation.

Other measures included the reduction of the use of foreign currencies in the Russian economy, the development of innovation technologies, the attraction of investments, the support of high-tech small and medium business, and the optimization of labor migration.

"The implementation of this strategy should result in ensuring the economic sovereignty of Russia, the national economy’s sustainability to external and internal challenges and threats, the strengthening of social and political stability, the dynamic socio-economic development, the increase of population’s life quality," the document read.

According to the strategy, Russia’s cabinet of ministers will have to submit a report on the state of the country’s economic security and related measures annually, while the adjustment of the 2030 strategy will take place every six years.