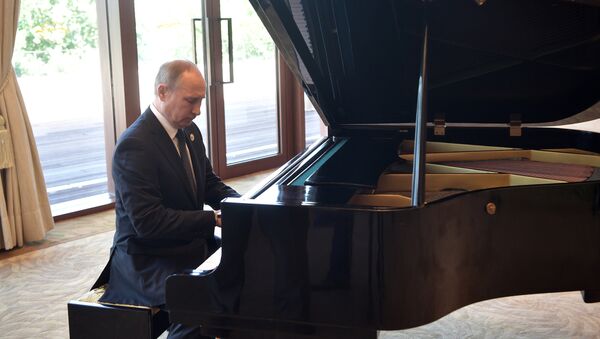 © Sputnik / Aleksey Nikolskyi
/
Go to the photo bank
Subscribe
While waiting for a meeting with Chinese President Xi Jinping, Russian President Vladimir Putin decided to play the piano that was in the residence of his Chinese counterpart. The video of the Russian leader playing two Russian songs went viral.

Later, at a press conference following his visit to China, the Russian President said that he was simply "trying the piano keys" and did not think that the video would be made public.

"I can't say I was playing. I just pressed the keys with two or three fingers, while waiting for our Chinese friend and partner. I thought, if Mr. Peskov was filming something, then was probably for personal purposes, for the archive. But they decided to publish it. Well, it's okay, I trust that you weren't disappointed " Putin commented on the issue.

At the same time, the Russian President noted with regret that "the piano was out of tune."

"It was quite difficult to play, even for me, a person who plays with two fingers," Putin said.

Putin Plans to Visit China in May to Attend 'One Belt, One Road' Forum
During his visit to Beijing to attend the One Belt — One Way economic forum, Russian President Vladimir Putin headed to Chinese President Xi Jinping's official residence for a bilateral meeting with his Chinese counterpart.

While waiting for his Chinese counterpart at the villa, Putin spotted a grand piano and, apparently captivated by the sight of it, sat down and performed a couple of songs.

The Russian leader played two songs, Moscow Windows and The City on the Free Neva River — the unofficial anthems of Moscow and St. Petersburg respectively.