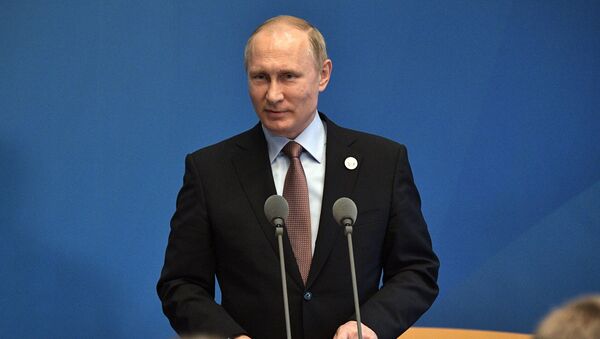 New Silk Road: What to Expect From Russia's Involvement in Chinese Megaproject
On May 14-15, the Chinese capital has hosted the international forum dedicated to the initiative of Beijing to develop infrastructure in Eurasia and to strengthen ties between the countries of the continent. The event is expected to gather together dozens of world leaders, including Putin, Turkish President Recep Tayyip Erdogan and Belarusian leader Alexander Lukashenko among others.

Putin said that the internal political struggle in the US "creates nervousness in politics and economy" of a global scale.

"Given the growing number of elements of uncertainty in the leading political and economic centers, say, we see that in the United States an acute internal political struggle continues, which creates a certain nervousness not only in politics, but also in the economy," Putin said.

"I would like to confirm that we are categorically against the expansion of the club of nuclear states, including through the Korean peninsula, through North Korea. our position is well known to our partners and the world, to North Korea in particular. We are against it and consider it counterproductive, damaging, dangerous," Putin told a press conference in China.

"In any case, we consider nuclear and missile tests unacceptable. We need to return to dialogue with the Democratic People's Republic of Korea, stop intimidating it and find ways to solve these problems peacefully. Is it possible or not? I think it is possible." The Russian president said there was such a positive experience of dialogue with the DPRK when North Korea announced the termination of its program, "but unfortunately, all the negotiators did not have enough patience."

He said that "violent overthrows of regimes and invasions in other countries provoke an arms race."

Russia Air Defenses in Far East on High Alert Amid Pyongyang Missile Test
North Korean missile launch did not present a threat to Russia, although it "has a provocative influence [on global politics]; there's nothing good in this," Putin said.

On May 14, North Korea launched a missile, which fell in the Sea of Japan after flying some 500 miles. The move has been criticized by a number of countries, including the United States and South Korea.

Tensions around North Korea's activities with both nuclear and non-nuclear weapons have drastically escalated in recent months after Pyongyang had conducted a number of nuclear tests and ballistic missile launches in violation of the UN Security Council's resolutions.

Support of Kurds in Syria

Kurdish Expansion Plans Risk Undermining Russia-Sponsored Safe Zones in Syria
When asked whether Russia supplies Kurdish fighters with arms in Syria, Putin said that Moscow, unlike the US, doesn't do that.

However, Moscow believes it has a right to maintain working contacts with Kurdish formations in Syria, Putin noted, answering a question concerning Ankara's objections concerning states' cooperation with Kurdish groups it considers terrorist.

"Unlike other countries, we do not announce the supply of weapons to Kurdish units, and they do not much need our deliveries. They have… other sources of receiving these weapons. We do not believe that we need to somehow intensify this work," Putin said.

"Since the Kurdish factor is a real factor in the situation in Syria, and Kurdish fighting units take part in military operations against the so-called Islamic State [Daesh terrorist group] and are among the most combat efficient units, we consider ourselves entitled to maintain with them working contacts, at least in order to avoid possible clashes and situations that could create threats to our servicemen," Putin said.

He said that Russia doesn't believe that work on the resolution of the Kurdish issue should be intensified, adding that it was discussed with Turkish President Recep Tayyip Erdogan. Putin emphasized that the most important thing is to consolidate the ceasefire currently underway in Syria.

"Regarding the safe zones, I hope that this will be an effective tool. First of all… to preserve the ceasefire regime. In fact, today this is the most important thing — to consolidate, strengthen the ceasefire."

The Syrian conflict has been raging since 2011 with its government troops fighting against numerous opposition and terrorist groups. The Kurdish-led SDF launched the Rage of Euphrates operation in November 2016 aimed at the liberation of Raqqa city from terrorists.

When asked about the global cyberattack, Putin said that Russia is concerned over the hacker attack, however, so far it has caused no significant damage for the country.

He emphasized that "Russia has nothing to do with it," while the source of primary virus was the US.

"For us there has been no significant damage: neither banks, nor for the healthcare system. But this [the cyberattack] is serious, it causes concern," Putin said.

"[The hacker attack] is a matter of concern. As for the source of those threats, in my opinion, the Microsoft authorities clearly stated… that the special services of the United States were the primary source of this virus. Russia has nothing to do with it. I am surprised to hear anything else in these circumstances," Putin said.

Microsoft President Calls for 'Urgent Collective Action' After Major Cyberattack
Last Friday, the Kaspersky Lab IT company registered about 45,000 ransomware attacks in 74 countries worldwide, with the largest number of targets in Russia. The company reported that the attack was carried out with the use of ransomware dubbed WannaCry. The malicious software has reportedly infected computers in up to a hundred countries and tried to extort users' money.

Putin and his Chinese counterpart Xi Jinping announced the next meeting in the Silk Road Forum format will be held in 2019.

Russia and China are cooperating in many high-tech industries, for example, in space and aircraft manufacturing, Putin said.

"We cooperate in space quite successfully, and there is every chance that we will increase this cooperation. Supplies of our rocket engines to China are on the agenda," Putin told a press conference.

"You know that we have created for the first time in 29 years a brand-new, competitive product, a new medium-thrust engine. Now we have a high-thrust engine on the agenda and this gives us the opportunity to implement the idea of ​​our own wide-body aircraft jointly with Chinese partners. There are all chances to do it," Putin said.

The Russian president emphasized that the main area of cooperation is the energy sector, adding that Russia and China are going to work in the LNG area together.

"Work on the Power of Siberia gas pipeline is proceeding in line with the plan. Here we no longer have disputes over prices, almost everything has been decided. We will produce liquefied natural gas jointly, and we will rather confidently enter the markets of third countries," Putin said.

He said that Russia is open to cooperation with any state, adding that China has also demonstrated such openness.

When asked of an alleged risk of Russia's absorption by the Chinese economy, Putin said that "Russia is not a country that is afraid of anything. Certainly China's actions are not at all directed at any kind of absorption."