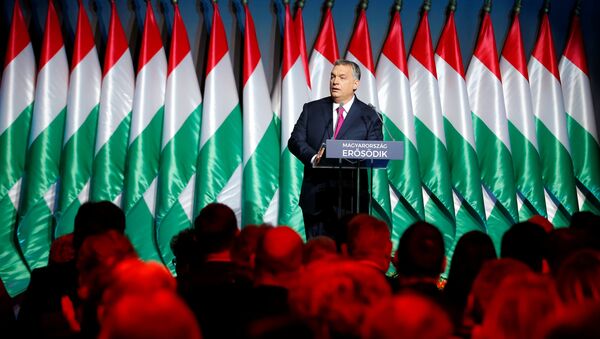 The European Parliament is set to consider invoking Article 7 of the Treaty on European Union - for the first time - against Hungary, over controversial legislation changes with MEPs saying "enough is enough" and "finally break the silence over [President] Orban's attempt to turn an EU member state into an illiberal state."

EU Chief in Talks With Ignatieff Over Hungary Crackdown on Soros University
The Hungarian Parliament, April 4, passed a motion effectively preventing the Central European University (CEU) — founded by Hungarian-born billionaire George Soros — from operating as an educational institution in the country.

It brought an immediate backlash from academics and politicians who said it was a deliberate act to silence Soros, who has been critical of Hungarian Prime Minister Viktor Orban.

Hungary is under further pressure from within the EU after the government announced that Hungarian NGOs that receive US$25,000 from foreign sources should have to register with the authorities and represent themselves to the public as foreign-funded organizations.

#Orban's words to @EPPGroup mean nothing. "We're not going to shut down, but we may have to leave the country." https://t.co/bgVR7U3fG3 #CEU pic.twitter.com/nyS80xU6ww

​"The developments in Hungary over the last seven years have led to a serious deterioration of the rule of law, democracy and fundamental rights. And again, in the last year, the Hungarian government has attempted to shut down an independent university, has attacked NGOs and has threatened the fundamental rights of asylum seekers," said Socialists and Democrats MEP Victor Bostinaru.

"What is happening in Hungary is bigger than any individual action or law. We are seeing a systemic attack on the basic principles of democracy and the rule of law. Enough is enough. Next week Parliament will adopt a resolution calling for the triggering of the Article 7 (1) procedure. The EPP has to finally break the silence over Mr. Orbán's attempt to turn an EU member state into an illiberal state."

Article 7 of the Treaty on European Union aims at ensuring that: "all EU countries respect the common values of the EU, including the rule of law. The preventive mechanism of Article 7(1) TEU can be activated only in case of a 'clear risk of a serious breach' and the sanctioning mechanism of Article 7(2) TEU only in case of a 'serious and persistent breach by a Member State' of the values set out in Article 2."