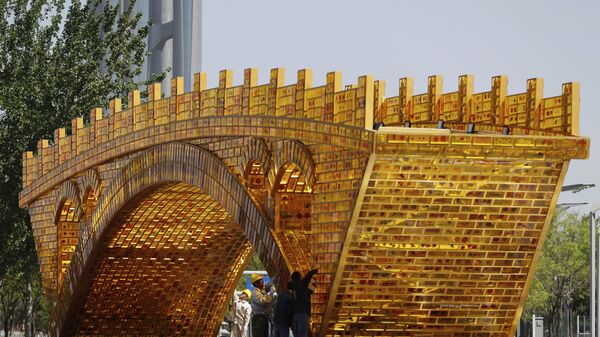 © AP Photo / Andy Wong
Subscribe
Russian President Vladimir Putin made a speech at the opening ceremony of a New Silk Road forum in Beijing. Moscow has been expected to be an active participant to the Chinese megaproject. However, experts warn about a number of potential obstacles on this way.

A major international forum kicked off in the Chinese capital of Beijing on May 14. The Chinese government expects that the forum will push forward the One Belt One Road initiative, including the Silk Road Economic Belt and Maritime Silk Road. The initiative was proposed by Chinese President Xi Jinping in September 2013.

The forum will end on May 15, and according to Xinhua News Agency, over 1,500 delegates from 130 nations, as well as representatives from more than 70 international organizations, were expected to attend.

A Bridge Between Europe and Asia

While opening the summit, Xi Jinping highlighted the principles that Beijing wants in the basis of the New Silk Road initiative. Among them are peace and cooperation, openness and mutual benefit.

"No matter if they are from Asia and Europe, or Africa or the Americas, they are all cooperative partners in building the Belt and Road," The Chinese leader said highlighting the scope of the project.

Russian President Putin took the stage after his Chinese counterpart. Putin underscored the need to establish a greater Eurasian partnership to build a bridge between Asia and Europe.

Putin: Russia Will Actively Participate in 'One Belt, One Road' Initiative
According to the Russian leader, the creation of the economic development belt and organization of mutually beneficial trade between Asia and Europe seem to be an important initiative that takes into account the current trends in the world economy and also reflects the overall need for coordination of diverse integration processes on the Eurasian continent and in other regions of the world.

Putin said that in order to deepen integration processes in Eurasia it is necessary to liberalize trade rules, unify regulatory norms for all kinds of products and create new transportation corridors and infrastructure capabilities.

"It is important that all integration structures – both existing in Eurasia and newly formed – would rely on universal internationally recognized rules, and, of course, take into account the specific features of the national models of development of the participating states, act openly and transparently," Putin said.

Xi: China 'Has No Intentions to Impose Its Will' on Other States Via Silk Road
Since the Silk Road initiative was announced in 2013, the project has been "vague and unclear" in terms of concrete projects and the number of countries involved, according to a research by the French Institute of International Relations.

Meanwhile, two institutions to finance the implementation have been established. In December 2014, the $40 billion Silk Road Fund was launched, and in December 2015, the Asian Infrastructure Investment Bank (AIIB) was established with a capital of $100 billion.

Moreover, Beijing will invest an additional $14.5 billion into the Silk Road Fund, Xi said. Another $8.7 billion will be unveiled in the coming three years in aid to developing countries and international bodies in countries along the new trade routes.

As for the implementation of the New Silk Road initiative, Chinese officials say that a network of new logistics routes and facilities will be constructed, including new highways, railways, ports, pipelines and power plants, along the routes to connect China with the Asia-Pacific Region, the Gulf region, Central Asia, Africa and Europe.

Heart of Eurasia: a Closer Look at the Key Region of China's New Silk Road
According to experts of the Russian International Affairs Council, the development of the One Belt One Road initiative will help increase China’s foreign trade, deal with domestic overproduction and stimulate development in lagging regions, for example, in Xinjiang.

Since 2013, nearly 100 countries have expressed interest in the project, but not all of them are cooperating. Between 2014 and 2016, Chinese companies signed deals worth $305 billion in New Silk Road countries, according to Reuters.

At the same time, according to The Financial Times, Chinese investment into the New Silk Road decreased in 2016. Foreign direct investments from China to countries identified as part of the initiative decreased 2 percent in 2016 and has dropped an additional 18 percent in 2017, the newspaper reported, based on data from the Chinese Commerce Ministry.

Chinese bankers and businessmen told the newspaper on the condition of anonymity that many of the projects the government wanted them to invest in generate no profit.

China's New Silk Road Project Has 'Enormous Potential' to Benefit Russia
As for Russia’s involvement in the One Belt One Road project, expectations have also been high.

"The potential is enormous, the potential is big, interesting. … The benefit that Russia can enjoy from this common movement from the east to the west is that, at least, inside the process we can control it and [influence] some projects which are necessary for Russia, for the development of the region and neighboring countries," Kanavsky said.

At the same time, Alexander Gabuyev, chief of Russia in the Asia-Pacific Region program at Carnegie Moscow Center, told Sputnik that the New Silk Road project has so far failed to meet Russia’s expectations.

According to the expert, previously Beijing invested regardless of the potential profitability of the project, which resulted in serious problems in the Chinese banking system in 2015. As a result, China reconsidered the strategy, placing focus only on projects with bright financial future.

Beijing Insists Absence of Western Leaders at Silk Road Forum Isn't Political
"For example, since 2014, the $40 billion Silk Road Fund has invested only in five projects. If it had been a regular commercial fund it would have been dissolved long ago," Gabuyev said.

The Kremlin’s press office reported that China sees Russia as a key partner in the implementation of the New Silk Road initiative. For Moscow, cooperation with Beijing will create the opportunity to modernize underdeveloped areas in the Far East and Siberia, which are in need of investments and modern infrastructure.

At the same time, the Silk Road Fund has not actively been investing in Russian projects, except for buying a 9.9 percent stake in the Yamal liquefied natural gas (LNG) project and a 10 percent stake in petrochemical holding SIBUR.

Russia-China Power of Siberia Gas Pipeline Construction Going Ahead of Schedule
"These are the only practical result for Russia so far," Gabuyev said.

As he explained, while China did make considerable investments in the Yamal LNG project and SIBUR via the Silk Road Fund, Beijing has merely used the fund as "a wallet which is not connected to the global financial system and therefore immune to US sanctions."

According to the expert, China’s participation in these two deals should be regarded as "political investments" into friendly relations between the leaders of the two countries.

One of the key criteria behind China’s investments is the level of readiness of the project since Beijing does not want to be a "charity giver" for other countries, including for Russia, according to Igor Denisov, a senior research fellow at the Institute for International Studies, the Moscow State Institute of International Relations (MGIMO).

"Russia should be more focused on winning the interest of Chinese investors. Taking into account the economic situation in China, Beijing will be more cautious in the selection and evaluation of economic projects abroad," Denisov told RBK.

During a Moscow summit in May 2015, Putin and Xi reached an agreement on integration between the New Silk Road and the Eurasian Economic Union (EEU). However, the integration principles are still in development. The key issue is to establish rules that would harmonize ties between China and the EUU member countries.

China's New Silk Road is the 'Backbone of the Global Economy'
"Of course, the statement made in May 2015 was rather a compromising political declaration, but it was an important compromise. It launched negotiations between China and the EEU," Denisov noted.

Integrations between the New Silk Road and the EEU will help minimize risks of confrontation between Russia and China in the event of a collision of interests in Central Asia.

"China’s economic interests in Central Asia will continue to expand. It cannot be ruled out that China will also have military interests in the region. Russian should formulate its attitude to such a scenario," Gabuyev said.

He noted that integration between the New Silk Road and the EEU could divide areas of influence in the region and create guarantees against confrontation in the coming years.