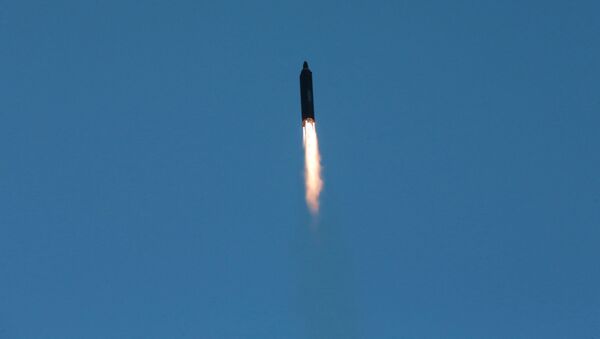 © REUTERS / KCNA
Subscribe
In what could be a turning point in China’s foreign policy toward North Korea, Beijing may be ready to support an increase in economic pressure against the isolated state to end ballistic missile and nuclear bomb testing.

The People's Democratic Republic of North Korea (DPRK) on Sunday launched a ballistic missile just hours before China was to begin its most important global diplomatic event. The Chinese Belt and Road Forum for International Cooperation, in Beijing, was attended by top world leaders, including Russian President Vladimir Putin. Pyongyang's ill-timed move has sparked renewed world anger at the country's refusal to end its militaristic moves.

Analysts observing the incident noted that Beijing may now be ready to support Washington's call for the UN Security Council to implement new sanctions on the DPRK as a means to end what the West condemns as aggression.

Russian President Vladimir Putin, while noting that Pyongyang is being routinely intimidated, nonetheless referred to the launch as "dangerous."

Following an urgent request by Japan and the United States, the United Nations Security Council will gather an emergency session on Tuesday to craft a response to the most recent DPRK ballistic missile test.

Professor Su Hao, of China Foreign Affairs University, remarked that Pyongyang would "be held accountable and pay the price" for acting against UN security resolutions.

"This could also be an opportunity for China to show that it can initiate some plausible plans to handle the North Korean issue within the framework of the international community," he added, cited by SCMP.

Other ways that have been floated as a means to get Pyongyang to come to the bargaining table include Beijing offering DPRK leader Kim Jong-un asylum, or cutting off North Korea's primary power source: Chinese oil.

"But this would be the last measure China would want to ever use because the Chinese leaders fear the consequences would be too big to control, " said Lee Dong-ryul, of South Korea's Dongduk Women's University.