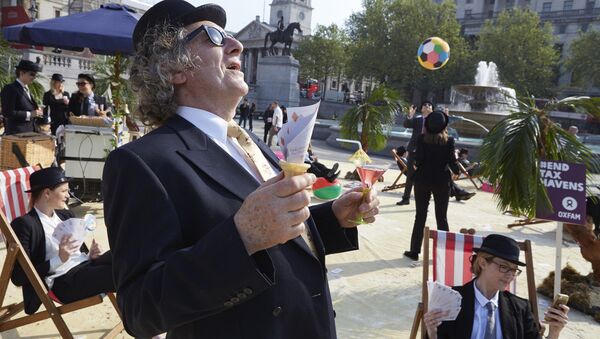 © Photo : Andy Hall/Oxfam
Subscribe
A year on from the historic London anti-corruption summit - hosted in London by former British Prime Minister David Cameron, May 12, 2016 - campaign groups say little progress has been made on tackling tax evasion and money laundering.

The summit was billed as a "landmark" meeting which promised to fight corruption which "is at the heart of so many of the world's problems. It erodes public trust in government, undermines the rule of law, and may give rise to political and economic grievances that may, in conjunction with other factors, fuel violent extremism," according to the final declaration.

Opening the conference, Cameron said: "What we're doing to expose corruption, where the absolute key is having greater transparency and you can see countries committee to exchanging more tax information, ownership information and — in the case of the United Kingdom and others — for the first time having not just a beneficial ownership register — who owns what — but also making that public so that it can be investigated by others."

However, critics have said that — although the UK itself may be cracking down on corruption — many of the Crown dependencies of the United Kingdom — such as Jersey, Guernsey and the Isle of Man — and British Overseas Territories — including Bermuda, the Cayman Islands, the Turks and Caicos Islands, the British Virgin Islands and Gibraltar — remain secretive about the tax affairs of companies registered in their territories.

​One year on, campaign group Transparency International says only five of the fifteen UK commitments are now marked as "complete."

"There is no public evidence of any progress on five of the UK's pledges, and three of the commitments being tracked are overdue. This isn't good enough," Transparency International said.

"The UK's commitment to develop the International Sport Integrity Partnership is marked as complete, but it is also marked with a 'thumbs down' symbol [in the group's interactive tracker]. This is because although the Partnership was launched in February, there has been no public evidence of the UK's role in setting it up.

A year on, 1 in 5 of #AntiCorruption Summit pledges are overdue. We review Gov't action & what you can do to help: https://t.co/7HqmIrvMo4

"There is also no information about which other governments or organizations are in the Partnership, nor is there public detail on what practical steps the Partnership will take to reduce corruption in sport.

"The UK Anti-Corruption Strategy was scheduled to be published by the end of 2016, but there's still no sign of it. Without an over-arching anti-corruption strategy there is no discernible long term vision or goal to which the Plan is contributing or view of what a coordinated government approach to corruption should look like," the group said.