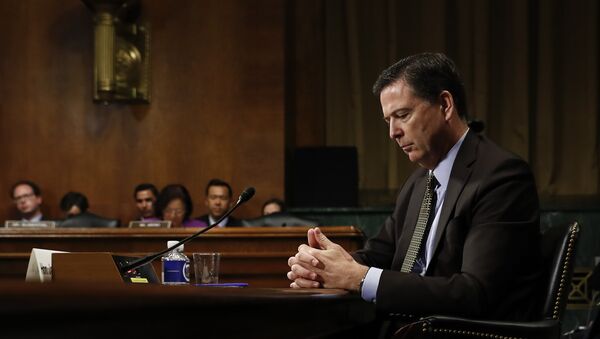 Following the surprise dismissal by President Trump of the ex-FBI Director James Comey, Sputnik Deutschland talked to German political analyst Lora Anne Viola and journalist and filmmaker Dirk Pohlmann, who said that the US leader did not have any real reasons for this move and that it plays into his opponents' hands.

A Threat or a Warning: What is Behind Trump's Recent Remarks to Comey
German political analyst Lora Anne Viola said that the US President did not have any reasonable grounds for the dismissal of the ex-FBI head. However she noted that Comey was not a loyal and devoted associate to Trump.

"Maybe Trump hoped that this move will be welcomed by both the Republicans and the Democrats. Both parties were very vocally critical of Comey and so the criticism and outrage over the dismissal has surprised Trump," she said.

Meanwhile Dirk Pohlmann, a journalist and author of numerous documentaries, mostly about the military and secret services during the Cold War, said that the move only played up to Trump's opponents.

He said that there is a very serious movement in the US to impeach the President, with the impeachment process of Richard Nixon, who became the only US president to resign from office, often cited as an example. It has reached an absurd scale, he said.

"Usually the US was very cautiously reporting about their presidents, however with Trump they are beating in full force," he noted.

The US mainstream media constantly says that the US leader is acting independently and on its own. However, the filmmaker says, he is constantly provoked to act as a hardliner, especially with regards to Russia. There are constant attacks on him.  Thus, he said, the president is not delivering on his promise to improve relations with Russia.

The Europeans, who are not ready for any military actions, should have supported Trump's policies, he said.