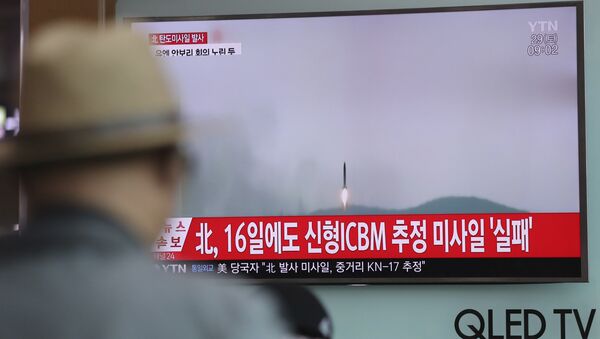 The US military has confirmed that North Korea fired a projectile on Sunday, but fell short of confirming it was an intercontinental ballistic missile, saying only that the launch did not pose a threat to North America.

WASHINGTON (Sputnik) — The US Pacific Command detected and tracked the latest missile launch by North Korea, however, there is no confirmation that it was an intercontinental ballistic missile, and it did not threaten the security of North America, the Command said in a statement on Sunday.

"U.S. Pacific Command detected and tracked a North Korean missile launch at approximately 10:30 a.m. (Hawaii time) May 13, 2017… The type of missile is being assessed and the flight was not consistent with an intercontinental ballistic missile… The North American Aerospace Defense Command (NORAD) determined the missile launch from North Korea did not pose a threat to North America," the statement said.

According to the statement, the US has expressed full commitment to working closely with its South Korean and Japanese allies to maintain security in the region.

Japan's Abe Warns of Possible New Provocations by N Korea After Missile Test
Earlier in the day, media reported citing the South Korean Joint Chiefs of Staff that Pyongyang had launched an unidentified missile, presumably a ballistic one, on Sunday in the vicinity of Kusong, North Pyongan Province, which flew about 430 miles and fell in the Sea of Japan.