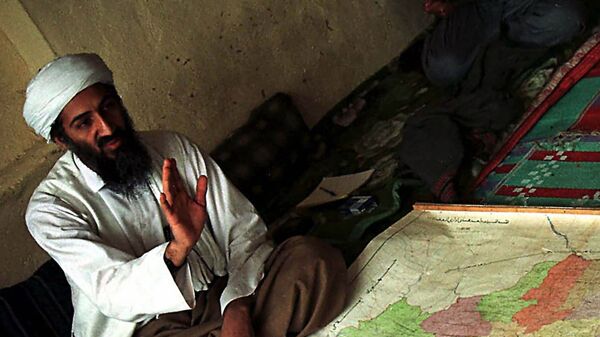 © AP Photo / File
Subscribe
International
India
Africa
In recently declassified letters, a son of Osama bin Laden vowed to follow the “path of jihad” and avenge his father's death at the hands of the US military.

Following the May 2011 raid by US Navy SEALS in Pakistan that saw the assassination of prominent Saudi terrorist Osama bin Laden, personal letters found among artefacts seized during the operation have been declassified, revealing a son clearly intending to continue his father's work.

Hamza bin Laden, now thought to be 28, was known to have spent time in Pakistan by his father's side prior to the 2001 9/11 terrorist attacks in the US cities of New York and Washington DC, which bin Laden is believed to have planned.

The recently declassified letters from Hamza to his father reveal a dutiful and angry son who, according to more recent statements, is "bent on avenging" the death of his father, according to the Times of India.

The letters were seized at the northern Pakistani compound where Osama bin Laden had been living in exile prior to his assassination by the US.

Hamza, although a boy at the time, was featured in videos produced by his terrorist father toward the end of the 20th century, often holding a gun.

In a recent edition of the CBS news program 60 Minutes, former FBI agent Ali Soufan detailed that the recovered letters reveal a son deeply devoted to his father, and willing to continue his father's violence.

Soufan suggested that Hamza even then had the makings of a charismatic leader for al-Qaeda, and that the young man has been described as "articulate and dangerous," according to Reuters.

The security community of the United States has labeled Hamza a "specially-designated global terrorist," the same intelligence designation applied to his late father.

In describing Hamza, Soufan suggested that he was very similar to Osama bin Laden, even to the point of his phrasing and vocal tone.

"[Hamza] delivered a speech as if it's his father… using sentences, terminology that was used by Osama bin Laden," he said.

The son of one of the world's most notorious terrorists has posted four known recorded audio messages in the past two years, all calling for revenge against the US and a continuation of the violent activities of his father, according to the Times of India.

"I consider myself to be forged in steel," Hamza wrote in one of the personal letters to his father recovered during the assassination. "The path of jihad for the sake of God is what we live."