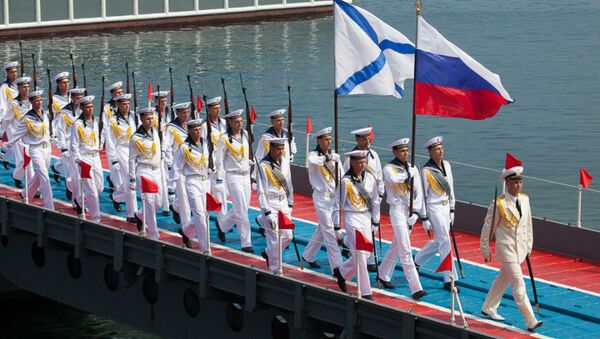 © Photo : Russian Defence Ministry
Subscribe
On May 13, Russia's Black Sea Fleet, its history inextricably linked with Russia's Crimea and the port city of Sevastopol, celebrates its birthday. The valiant defense of the port city throughout the 18th, 19th and 20th centuries has become the stuff of legends, and entered the pages of global military history.

Following Crimea's absorption into the Russian Empire in 1783, it quickly became apparent to Empress Catherine the Great that the peninsula on the Black Sea required a fleet to defend it. Ahtiar Bay, a sparsely populated area located in the southwest of the peninsula, was chosen to serve as the base for the fleet, and it was here that the city of Sevastopol was founded.

Russia's Black Sea Fleet, More Than Two Centuries on Duty
On May 13, 1783, 11 ships from the Azov flotilla became the backbone of the Black Sea Fleet, which was put under the command of Navy Vice-Admiral Fedot Klokachev, who would serve as the first commander in chief of the fleet. Klokachev would supervise the construction of Sevastopol together with his colleague, Foma Mekenzi (aka Thomas MacKenzie), a Scottish-Russian naval officer promoted to the rank of rear admiral of the Black Sea Fleet the same year.

It would be under legendary Imperial Navy commander Fyodor Ushakov, who commanded the fleet between 1790-1792, that Sevastopol would start to be transformed into the strategic port city it is today, complete with functional port facilities, barracks, hospitals, roads and markets. 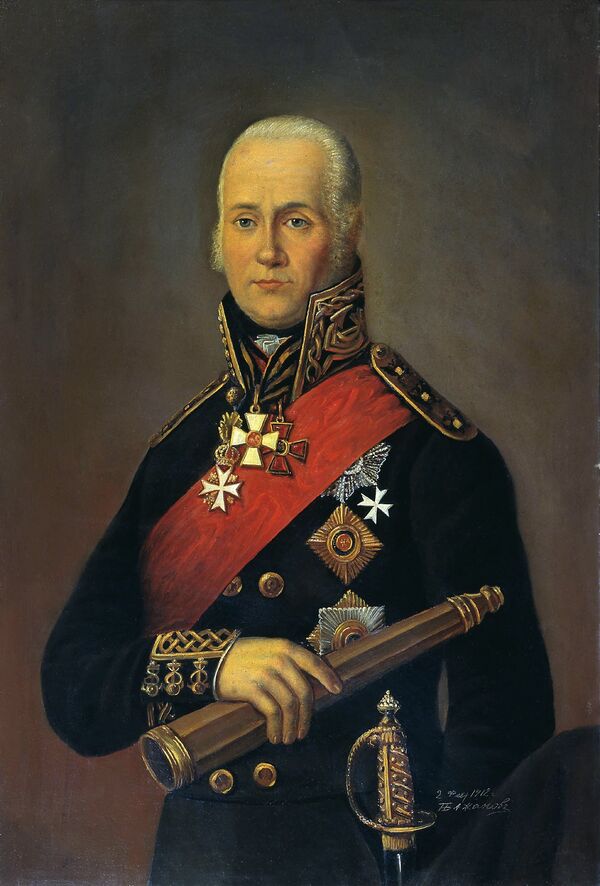 In a piece dedicated to the Black Sea Fleet's birthday, Russian military journalist and historian Sergei Varshavchik recalled that the Fleet would face its first challenges in the very first years after its founding.

The observer wrote: "The Ottoman Empire could not accept the loss of the [Crimean] peninsula, and attempted to repeatedly take it back by force of arms. The Black Sea Fleet received its baptism by fire in 1787, when the Ottomans, having enlisted the support of Britain, France, and Prussia, presented Russia with an ultimatum, demanding that Crimea and Georgia be handed to Ottoman jurisdiction."

Russian Black Sea Fleet Doubled Maritime Operation Time in 2016
During the Russo-Turkish war of 1787-1792, "while the Turkish forces on the ground were smashed by Alexander Suvorov, the ships of the Black Sea Fleet, under the command of several admirals, including Ushakov, inflicted the Turkish fleet with a number of serious defeats, despite the latter's numerical superiority, the last of them achieved at the Battle of Cape Kaliakra in 1791."

"The Russian squadron, led Admiral Ushakov aboard the flagship Rozhdestvo Khristovo, unexpectedly and swiftly approached the Turkish ships, opening fire at extremely close range. The Ottomans were so boxed in by the Russian ships that they ended up shooting into each other's ships while aiming at the enemy. As a result, in short order part of the Turkish flotilla was destroyed, with the rest fleeing under the cover of a thick powdery smoke and the onset of night."

Rumors spread in the Turkish Navy that Ushakov had decided to launch an attack on Constantinople, and the Ottoman government, picking up on these rumors, soon signed a peace treaty with Russia.

The Black Sea Fleet would continue to prove itself against the enemy in the 19th century, as well. In 1827, during the Battle of Navarino, the 74-gun ship Azov, under the command of Mikhail Lazarev, destroyed five Ottoman warships, including the flagship of the Turkish fleet. Three junior naval commanders who would go on to become heroes of the Crimean War of 1853-1856, including Lieutenant Pavel Nakhimov, Midshipman Vladimir Kornilov and Midshipman Vladimir Istomin, distinguished themselves in the battle. 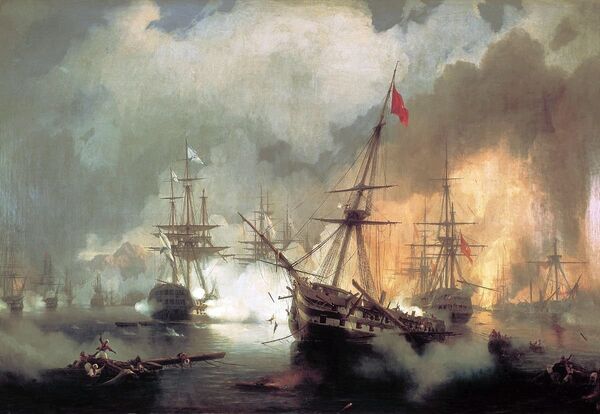 "The sailors of the Black Sea Fleet were never afraid of going up against an enemy which enjoyed numerical superiority," Varshavchik wrote. "In May 1829, the 20-gun brig Mercury, under the command of Lieutenant-General Alexander Kazarovsky, emerged victorious in a battle with two larger Turkish ships – the 110-gun Selimie and the 74-gun Real-Bey. The precise marksmanship of the Russian gunners caused such damage to the Ottoman ships that they were forced to break off their attack."

Throughout its campaigns, the ships of the Black Sea Fleet struck fear into the hearts of not only enemy ships, but enemy coastal batteries, emplacements and fortifications as well. 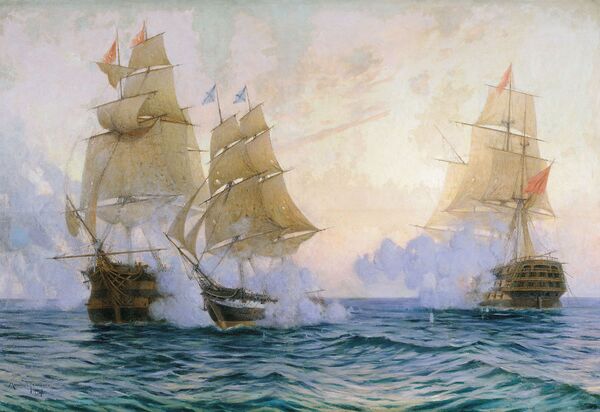 In November 1853, at the Battle of Sinop, a Russian Black Sea Fleet squadron under the command of Vice Admiral Pavel Nakhimov blocked Ottoman ships in the harbor of the Turkish city of Sinop, "and bombarded not only enemy ships, but coastal batteries over the course of several hours. As a result," Varshavchik  wrote, "Osman Pasha, the commander of the Turkish squadron, was taken prisoner, while Nakhimov was awarded the Order of St. George, Second Class and promoted to admiral."

The shock from this defeat was so great that the France and Britain soon joined the war against Russia. 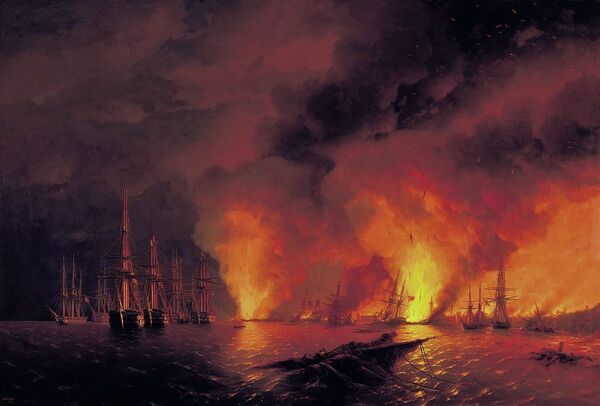 The journalist wrote: "In the Crimean War that followed, the sailors of the Black Sea Fleet proved that they were able to fight not only at sea, but on land as well. The Sevastopol Garrison, a considerable part of which was manned by sailors, defended the city against onslaughts by an enemy that had vast numerical superiority, over the course of 11 months. In 1855, pressed by the French and British, the southern part of the city was abandoned. However, when the enemy forces entered the burning city, they decided not to pursue the formidable Russian enemy."

In the late 19th and early 20th century, the Black Sea Fleet would benefit from a fledging Russian effort to industrialize. The Fleet met the First World War equipped with modern dreadnoughts, battleships, battle cruisers, destroyers and submarines.

Varshavchik wrote that unlike the ground campaign, where Russia began facing setbacks, "the situation in the Black Sea was the complete opposite. Sailors from the Black Sea Fleet mined the Bosporus, actively destroyed Turkish warships, and provided dependable support for the Romanian and Caucasian fronts." 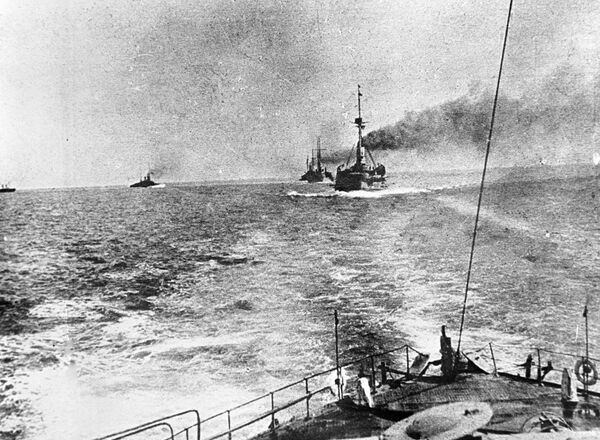 It was in the Black Sea too that the submarine fleet of the Imperial Navy had its biggest victories. Submarine commander Mikhail Kititsyn was credited with the destruction of 36 enemy ships.

50 Shades of Lenin: Colorized PHOTOS Help Bring History to Life
The February and October Revolutions of 1917 would halt the Black Sea Fleet's successful operations against the Ottoman Empire. In 1918, after signing the Treaty of Brest-Litovsk, the victorious Bolsheviks scuttled much of the fleet at Novorossiysk to prevent its seizure by the Germans. Many of the ships that were preserved were seized and taken to Turkish ports.

The rebirth of the Fleet began in 1921, only after the conclusion of the Russian Civil War. Its ships would include upgraded pre-Revolution ships, as well as over 500 vessels of varying classes which were built in the 1930s during the USSR's industrialization campaign; the Fleet was also fitted with a contingent of naval aviation and air defense. Sevastopol saw the construction and improvement of its coastal defense batteries, including the legendary armored Battery 35, armed with 305mm cannons.

Varshavchik emphasized that from the first days of the Great Patriotic War, "sailors of the Black Sea Fleet met the Nazi attack head-on, beginning by repulsing a Luftwaffe attack attempting to disable the main elements of the Black Sea Fleet at their port in Sevastopol. From that point on, amid the absence of large Nazi surface ships in this theater of operation, the main strike force in the Black Sea would be the Luftwaffe, which led an active struggle with Soviet ships. In turn, the Fleet's air forces, including its torpedo planes, would carry out their own strikes against the Kriegsmarine and units of the Wehrmacht." 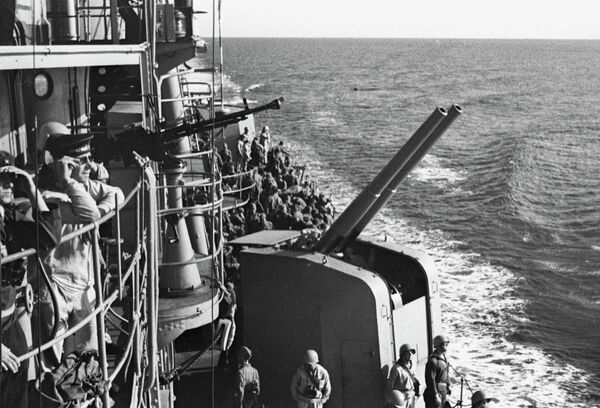 During the war, units of the Black Sea organized into naval infantry distinguished themselves in land battles. "Sailors, whom the Germans called 'Black Death' due to their fearlessness and the color of their uniforms, actively participated in the defense of Odessa and Sevastopol."

Russian Military Divers Salvage Secret Equipment From Spy Ship
"On November 7, 1941, on the approaches of Sevastopol, the commander of the 18th battalion of the Marine Corps, political instructor Nikolai Filchenkov and five seamen destroyed 10 enemy tanks, Filchenkov destroying the last of them at the cost of his life. Sailors of the Black Sea Fleet repeated such feats time and time again."

The defense of Sevastopol, which began in October 1941 after Nazi forces cut the city off from the Soviet lines, continued for nine months until July 1942, when the Wehrmacht finally managed to take the city. It is estimated that the German and Romanian forces, which enjoyed a numerical superiority of nearly 2-1 at the beginning of the operation, suffered over 60,000 irrecoverable casualties (dead or heavily wounded) and 240,000 more wounded.  18,000 Soviet troops were killed, 5,000 were heavily wounded, and 95,000 were taken prisoner. 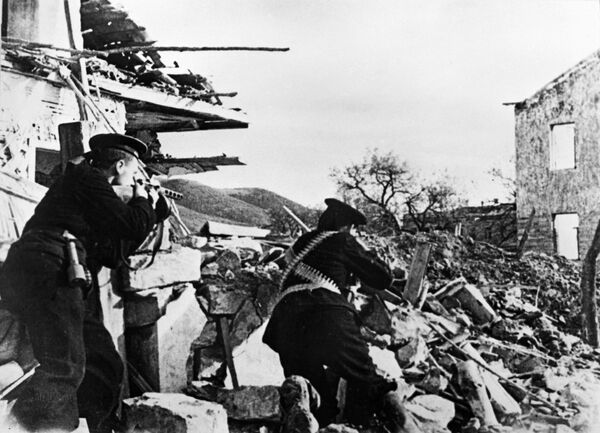 Naval infantry of the Black Sea Fleet, nicknamed 'Black Death' by the Nazis, fighting in Sevastopol
© Sputnik /
/
Go to the photo bank

Throughout the war, sailors and officers from the Black Sea Fleet spearheaded 13 ambitious assaults, the largest of them being the Kerch-Feodosia operation of 1941-1942, and the Kerch-Eltigen Operation of 1943-1944.

In May 1944, marines smashed through enemy lines into Sevastopol, kicking out elements of the 17th German army. Meanwhile, the naval aviation of the Fleet destroyed the majority of the enemy ships preparing to evacuate by sea.

In all, more than 200 officers and sailors of the Black Sea Fleet were awarded the title Hero of the Soviet Union, the highest distinction in the country.

"In the post-war period and up to the present," Varshavchik  wrote, "the main [prospective] enemy of the Black Sea Fleet were the naval forces of NATO countries, first and foremost US ships. Foreign ships repeatedly attempted to approach our shores to collect intelligence of our offshore and onshore installations."

In the twilight of the Soviet era, on February 12, 1988, sailors and officers of the Black Sea Fleet initiated what would become the final drama of the Cold War. As the US Navy's USS Yorktown cruiser and USS Caron destroyer attempted to pull off a blitz intel-gathering raid of the Crimean coast, two Black Sea Fleet frigates, the Bezzavetnyy and the SKR-6, pulled up alongside the American ships and began ramming them, eventually pushing them out of the area.

What Was a US Spy Plane Searching for Along Russia's Borders on V-Day?
Varshavchik wrote: "The collapse of the Soviet Union dealt a serious blow to the Black Sea Fleet." After the collapse, both Russia and Ukraine would make countervailing claims as to the Fleet's status. The two countries eventually agreed on the separation of the Russian and Ukrainian naval forces in the region, "but for a long time the main base of the Black Sea Fleet – Sevastopol — retained the uncertain status of leased territory."

In March 2014, following a peninsula-wide referendum on the status of Crimea, initiated following the Maidan coup in Kiev, Sevastopol and the rest of the peninsula broke off from Ukraine and rejoined Russia, nearly 60 years after Soviet leader Nikita Khrushchev had first transferred the territory to Ukrainian jurisdiction. Thus, the Hero City, built, fought over and defended by Russian sailors over the course of over two centuries, returned home.

In September 2015, a new chapter in the Black Sea Fleet's history began, as ships from the Fleet joined the Russian counter-terrorism operation in Syria. The Russian Navy's special Mediterranean squadron is subordinated to the commander in chief of the Black Sea Fleet.