Paying the Price: Montenegro to Face 'Grave Consequences' of Its NATO Accession 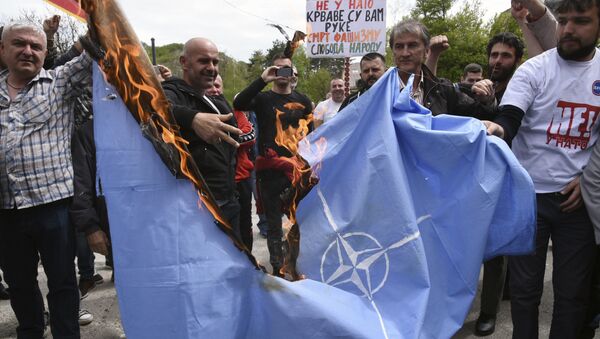 Meet the Man Behind Operation 'Drag Montenegro Into NATO'
On Friday, Montenegro's government said that all the members of the North Atlantic Treaty Organization had ratified the protocol on the accession of Montenegro to the alliance.

The ratification of the protocol signed in May 2016 by all NATO member nations was a necessary requirement for Montenegro joining the group.

Montenegro's Prime Minister Dusko Markovic said that the formal joining of NATO, which could take place at the next summit of the military alliance in May, would add to the stability and economic benefit of the country and to the Balkans at large, including an increased influx of foreign investments to Montenegro.

Earlier, the Montenegrin Defense Ministry reported that the country's annual contribution to the NATO budget will stand at 450,000 euros, or 0.027 percent of the annual budget of the organization. 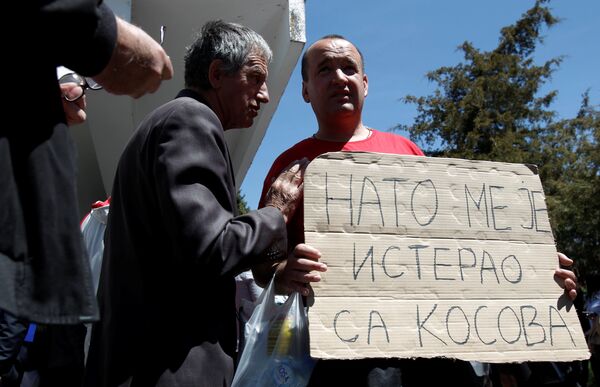 A protester holds a banner that reads "NATO forced me out of Kosovo" after a protest described as a parallel parliament, ahead of April 28's parliament vote to ratify the Montenegro's NATO membership, in the village of Murino, Montenegro, April 26, 2017
© REUTERS / Stevo Vasiljevic

Speaking to Sputnik, Professor Vladimir Kozin of the Russian Academy of Military Sciences said that Montenegro's joining of NATO will result in a spate of grave consequences for the country.

He said that "first of all, a number of Montenegrins refused to support their country entering NATO."

"Also, it is worth recalling that Montenegro has not contributed to the common defense coffers of NATO bloc before. That's why they will twist its arms and force Montenegro implement the decisions of NATO summits in 2014 and 2016, which stipulate the country allocating 2 percent of its GDP for NATO's budget," Kozin said.

In addition, Montenegro will be forced to purchase NATO's equipment, weapons and ammunition, according to him.

"All this may lead to social benefit cuts in Montenegro and Montenegrin troops being sent to the world's hot spots as part of the NATO contingents. In a word, there will be a partial loss of Montenegro's military and political sovereignty," Kozin added.

He also said that Montenegro joining NATO will most likely damage Podgorica's relations with Russia.

"Practice has already showed that all those states that were recently admitted to NATO embarked on sharp anti-Russian sentiments. As we know, it is a protracted illness which cannot be treated quickly. This is why it will affect Russian-Montenegrin tourist and business ties, as well as contacts between ordinary people," Kozin concluded.

Montenegro was invited to join NATO in December 2015, as part of the first expansion of the alliance into Eastern Europe in six years.

Podgorica accepted the invitation on December 3, 2015. However, the government's decision to join NATO triggered mass protests throughout the country.

Montenegro: Ratification of NATO Treaty 'Goes Against the Will of People'
On April 25, US President Donald Trump signed the protocol on Montenegro’s accession to NATO, which was the final step in ratifying the document.

000000
Popular comments
the society is very weak. you can't tell me that a few citizens could not get rid of this dictator. Protests are useless. They will loose big time from tourism. Russians invested a lot in summer homes in Montenegro. They won't be coming back. The country is not on the way to anything. Big ships can't enter their ports. The people will just be sacrificed to the war machine called nato. They should of stopped the succession from Yugoslavia and Serbia. The people did nothing. they believe BS. They will be another Ukraine