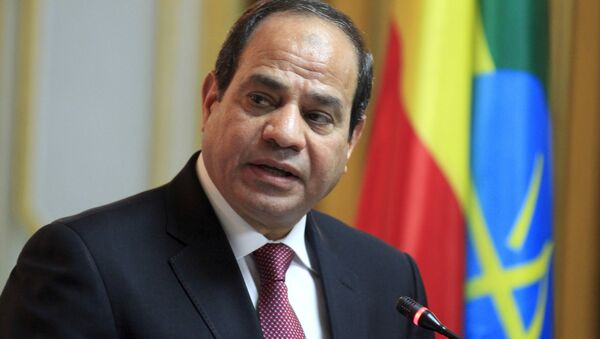 Egyptian President Abdel Fattah Sisi stated that the dialogue should focus on the issues concerning the amendments to intra-Libyan agreement on settlement signed in Moroccan city of Skhirat in 2015.

"All efforts of Egypt and different political forces in Libya are aimed at finding a form in which the dialogue will be renewed," Sisi said, as quoted in the statement published on presidential website.

According to the president, the dialogue should focus on the issues concerning the amendments to intra-Libyan agreement on settlement signed in Moroccan city of Skhirat in 2015.

Sisi also stressed that the ban on arms deliveries to Libyan army should be lifted, since only Libyan military is capable of countering terrorism in the country.

Libyan Military Forces Liberate Port in Benghazi From Al-Qaeda Terrorists
Libya has been in a state of turmoil since 2011, when a civil war broke out in the country and long-standing leader Muammar Gaddafi was overthrown, and the country was contested by two rival governments — the internationally-recognized Council of Deputies based in Tobruk and the Tripoli-based General National Congress.

Earlier this month, Libyan Prime Minister Fayez Sarraj and Haftar met in the capital of the United Arab Emirates, Abu Dhabi, and agreed to hold snap presidential and general elections within six months, as well as to create a new ruling structure, namely, a presidential state council.