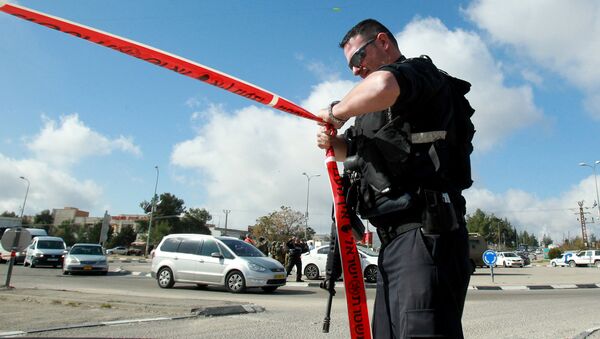 57-year-old Jordanian national, who entered Israel a few days ago as a tourist, stabbed the policeman in Jerusalem's Old City, according to local media.

MOSCOW (Sputnik) — An Israeli police officer was attacked by a Jordanian citizen wielding a knife in the city of Jerusalem on Saturday, local media reported.

According to The Times of Israel newspaper, a 57-year-old Jordanian national, who entered Israel a few days ago as a tourist, stabbed the policeman in Jerusalem's Old City.

Jerusalem Tells Citizens to Avoid Sinai Holidays Due to Imminent Terror Attack
The policeman was reportedly moderately injured, but managed to kill the attacker with a gun. The victim was taken to a local hospital for medical treatment.

The incident comes against the background of increasing stabbing attacks in Israel committed by Palestinians.

In April, a UK citizen Hannah Bladon was critically injured by a Palestinian resident of East Jerusalem Jamil Tamimi near the Old City in Jerusalem. She later died in a hospital due to numerous stab wounds. A week later pedestrians in Israeli city of Tel Aviv were attacked by a Palestinian man. The incident was recognized as a terror attack.