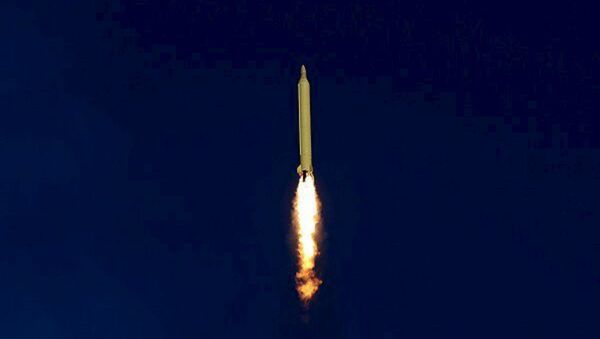 Director of US National Intelligence Daniel Coats said as he briefed the Senate on national security that Iran has continued its ballistic missile work in violation of UN resolutions.

The US intelligence head stressed that Iran has been steadily improving the range and power of its ballistic missiles in order to develop technology capable of carrying a nuclear warhead over thousands of miles to reach US soil.

Coats insists the ICMBs could actually be used by the Islamic Republic to launch a nuclear weapon.

"We judge that Tehran would choose ballistic missiles as its preferred method of delivering nuclear weapons, if it builds them," he said in a written testimony to the Senate Select Committee on Intelligence on Thursday.

According to Coats, Iran is using its space program as a disguise to illegally perfect ICBMs, as the expertise needed to launch satellites is similar to that needed to properly launch ICBMs.

"Progress on Iran's space program could shorten a pathway to an ICBM because space launch vehicles use similar technologies," Coats said.

According to the last US intelligence assessments, Iran's focus on ICBMs violates international prohibitions barring such activity.

"Iran is pursuing capabilities to meet its nuclear energy and technology goals and to give it the capability to build missile-deliverable nuclear weapons, if it chooses to do so," Coats wrote in the testimony.

Iran Ramps Up Oil Exports to South Korea, Much to Trump's Chagrin
The disclosure comes just days after Iranian military leaders announced the launch of two new Iranian-made satellites into space in the next few months. US national security experts suggest this could, in fact, be part of the country's larger nuclear weapons program.

In January 2016, the Joint Comprehensive Plan of Action (JCPOA) was implemented between world powers to ensure that Iran's nuclear program would be exclusively peaceful.

Iranian military leaders claim that testing missiles is not a breach to the agreement, and Iran has not been found by UN inspectors to be in violation of the agreement.