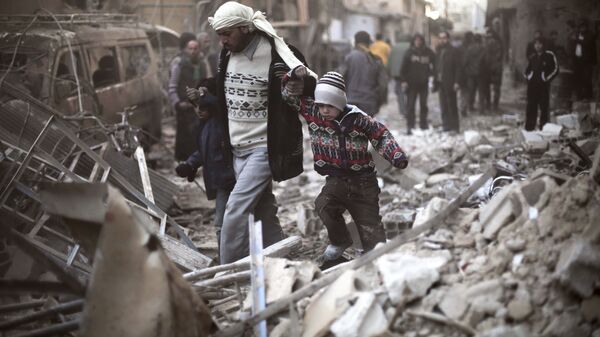 The United Nations should join the efforts aiming to control the implementation of ceasefire regime in Syria and implement some mechanisms, which will provide its upholding, the Syrian opposition High Negotiations Committee (HNC) said in a statement on Saturday, obtained by Sputnik.

DUBAI (Sputnik) — On May 12-13, the Committee's members gathered for a regular monthly meeting in the Saudi capital of Riyadh and discussed the upcoming round of the Geneva negotiations on the Syrian settlement.

"The Committee insists on the necessity, that the United Nations should play a role in securing the ceasefire agreement, implement the mechanisms of its upholding and also impose obligations on the conflicting parties," the statement said.

The Committee added that it wished a success in any initiative aimed at reducing the Syrians' suffering and expressed readiness to participate in any international efforts aimed at this.

Russian, US Ideas on Syria Safe Zones Could Be Compatible - De Mistura
"The Committee is committed to the political process under the auspices of the United Nations in Geneva… The core issues of the political process are the political transition of power, ceasefire, release of prisoners, delivery of humanitarian aid, protection of civilians. All these things are written in the UN Security Council resolution 2254," the statement said.

Syrian settlement talks take place on two parallel platforms: the UN-mediated Geneva talks, and the Astana talks, brokered by Russia, Turkey and Iran. The fourth round of Astana talks, held on May 3-4, resulted in adoption of memorandum on establishment of four safe zones in Syria. According to the memorandum, no clashes between government forces and armed groups should take place in the zones starting from May 6.