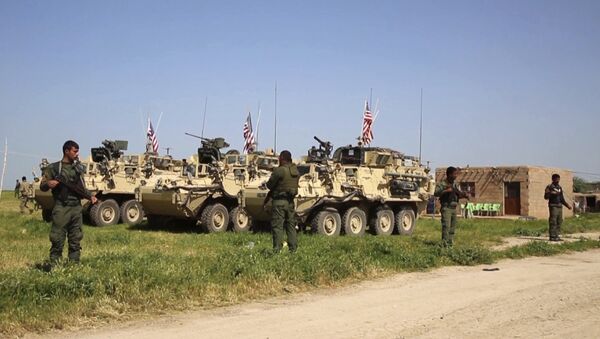 © AP Photo / APTV
Subscribe
International
India
Africa
This week the Trump administration granted the US Defense Department authority to arm the Kurdish People’s Protection Units or YPG, which are fighting against Daesh in Syria. Syrian and Turkish military experts discussed the decision with Sputnik, speculating on what Washington has in mind for Syria.

Message to Turkey: What is Behind US' Decision to Supply Arms to Kurds
US President Trump has authorized the supply of arms to the Kurdish YPG units, the only group it sees as capable enough to retake the Syrian city of Raqqa, the stronghold of Daesh (Islamic State) terrorists, in the near future.

Sputnik Arabic interviewed Syrian and Turkish military experts to hear their reaction to the decision.

Military strategic analyst, Syrian Brigadier General Muhammad Isi pointed out that the US is now openly pursuing its policies in Syria. Through this, he said, Washington wants to set up an organization which will oppose the existing authorities. It should become as influential as Russia's Hmeymim base, he said.

The US, he said, wants to set up an air base in the south of Raqqa [Governorate], in the Tabqa area, the site of oil deposits.

"They want to connect Raqqa with the Kurdish areas in Iraq and Jordan to be able to lay a Qatari-Saudi pipeline across four borders: Iraqi, Jordanian, Syrian and Saudi. The US had made a similar attempt several years ago when it was searching for ways to lay the pipeline bypassing the Syrian coast line," he told Sputnik.

Reasons Why Turkey May Become 'Less Interested in Getting Assad Out of Office'
Muhammad Isi also said that there is an agreement reached between Washington and Ankara to set up a Kurdish state. Turkey will turn a blind eye to it in exchange for the Syrian territories in the north of Idlib and Aleppo Governorates. The Kurdish state will be located predominantly on Syrian territory, to the east of the Euphrates, and the Turkish Kurds will move there. This plan meets Turkey’s approval, he said.

Meanwhile, Turkish military analyst Majid Izam suggested that there will be a new type of relationship between Washington and Ankara after the upcoming meeting between Presidents Erdogan and Trump. During their meeting in Washington next week the two leaders will discuss the supply of arms to the Syrian militants.

How Moscow Just Saved Turkey, the US and the Kurds From Duking It Out in Syria
The choice of the US will have either a positive or a negative impact on the region, he said. The US position might have already been voiced by Senator John McCain, he said, who has recently said that an alliance with the Kurds in Raqqa is more preferable from the military point of view, however politically, the alliance with Turkey will be more effective for the settlement of the situation in Raqqa and in Syria as a whole.

Meanwhile, a representative of the Kurdish YPG units, who preferred not to reveal his name, told Sputnik Turkiye what armaments the US is going to send to the Syrian Kurds.

The US army, he said, will also provide training to use these armaments.