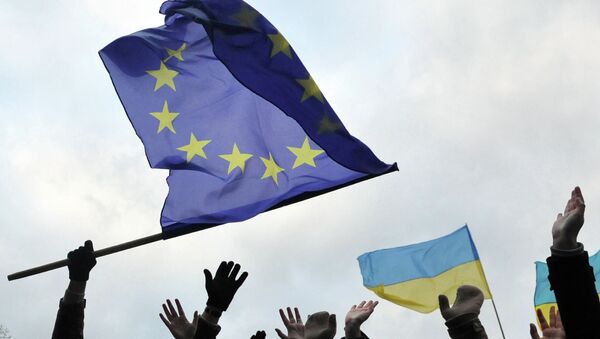 Visa Liberalization With Ukraine Gives EU 'Powerful Leverage' Over Kiev
In an interview with Sputnik, Russian political analyst Vladimir Zorin said that the European Union is tired of the political limbo in Ukraine and expects Kiev to take political action in exchange for Brussels granting Ukrainian citizens a 90-day visa-free travel.

On Thursday, the EU Council approved the liberalization of the visa regime with Ukraine, allowing those who travel "for business, tourist or family purposes" to enter and stay in the European Union for up to 90 days in any 180-day period without a visa.

The regulation, applying to the Schengen area and excluding Ireland and the United Kingdom, allows Ukrainian citizens to travel to the EU for business, tourist or family purposes with a biometric passport.

At the same time, Brussels promised to suspend this visa-free regime for Ukraine if the country faces "serious issues" related to migration and security.

Commenting on the matter, Vladimir Zorin said that the European Union has just slightly opened the door for Ukrainians.

He said that visa-free travel cannot be seen as a unique opportunity for Ukrainians because some important restrictions are still in place.

"On the one hand, it is a gesture of support for Ukrainian President Petro Poroshenko who is currently in hot water. On the other, one should understand that this decision stipulates Kiev sticking to a spate of conditions and that everything may finally be suspended. The door is ajar rather than open, and it can be closed at any moment," Zorin said.

He described the EU's decision as "a sort of message to America and its President Donald Trump who is currently trying to hammer out a policy on Ukraine."

"The EU is waiting for Kiev to do something in exchange for the visa-free travel. Brussels is tired of the current political and economic limbo in Ukraine, and the EU needs neither a frozen nor simmering conflict there, not to mention an open one," Zorin added.

He also said that the EU has "different approaches to this problem" and that "a certain consensus has now been reached."

"But I do not think that it is aimed at protecting the population of Ukraine's southeast. Rather, the EU wants to resolve a number of pragmatic tasks," he concluded.

Meanwhile, Russian Deputy Foreign Minister Alexey Meshkov said that the EU's latest decision to grant Ukrainian citizens a 90-day visa-free travel is a "carrot on a string" that does little in the way of easing the current system.

'Poroshenko Will Try to Hard Sell Ukrainian Crisis to Trump as a Key Problem'
He pointed out that the restriction on the duration of stay remained and that the new regulations had "nothing to do with work authorization."

"We understand that the so-called visa-free regime with Ukraine is to some extent a carrot on a string that slightly eases the existing system," Meshkov said at a meeting of the Valdai Discussion Club in Moscow on Thursday.