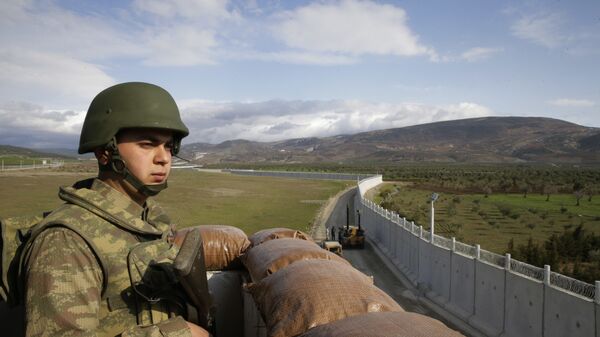 © AP Photo / Lefteris Pitarakis
Subscribe
International
India
Africa
Turkish Hurriyet Daily News has recently reported that Ankara will build a wall with towers and iron fences along the Turkish-Iranian border as a protective measure against the Kurdistan Workers Party (PKK). Iranian political analyst Hassan Hanizadeh commented to Sputnik on the effort saying that his home country poses no threat to its neighbors.

Turkey Plans to Build Wall on Iranian Border to Block Access for PKK
Turkey is planning to build a wall along the Turkish-Iranian border as part of measures against the Kurdistan Workers’ Party (PKK), outlawed in Turkey, the newspaper reported on Monday, citing some high-level official.

"The PKK has the Maku, Dambat, Navur, Kotr, Keneresh and Şehidan camps inside Iran near the Turkish border. There are some 800 to 1,000 PKK terrorists in those camps. They enter Turkey, carry out attacks and leave," it quotes the official as saying, adding that they "escape to those camps when security operations are conducted" in the Turkish eastern province of Agrı and the Mount Tendürek region.

"As a precaution against this, we are going to build a wall along 70 kilometers of the border near Agrı and [the eastern province of] Igdır, and we will close the rest of it with towers and iron fences. In addition, we are placing lights on the border," the source stated.

The outlet reminded that Turkey previously built a wall along the Syrian border in order to prevent the PKK and the Islamic State (Daesh) from carrying out suicide attacks.

Iranian officials have not yet commented on the issue. However the country's Persian language daily newspaper Ettelaat reported that the Iranian Foreign Ministry has expressed its indignation. The outlet quoted its source in the ministry as saying that the Iranian government is aware of Turkey's plans, however it thinks that Ankara should officially notify Tehran of the planned measures at their joint border and get Iranian agreement.

Sputnik Persian sat down with Hassan Hanizadeh, Iranian political analyst and expert on Middle Eastern issues, former chief editor of the country's leading news agency MehrNews to talk about any potential terrorist threat which Iran might pose to Turkey.

"Iran poses no threat to any of its neighbors. Conversely, present-day Iran is a guarantor of security and a symbol of the fight against terrorism in the whole of the Middle East," he told Sputnik.

Turkey Reinforcing Border With Syria
"The construction of a wall on a joint border does not ensure any security in the area. It is known only too well that the core of stability and security of a country lies in the national unity of its people," he said.

The political analyst further explained that the latest developments in Turkey, particularly the internal policies of President Recep Tayyip Erdogan and his government, have caused internal discontent and disagreements. The Kurdish national group, which amounts to 20 million people, has been virtually forced out to the border areas.

The Turkish authorities have deprived this ethnic group of its basic national rights and social freedoms, he said. This can only provoke discontent and disagreement in the Turkish society.

The construction of the wall on the Turkish-Iranian border, Hassan Hanizadeh said, will have no impact on the security within Turkey and is in itself absurd. Iran – is one of the very few stable and secure countries in the Middle East. Iran has defied international terrorism and is waging war against this evil, he said.

He reiterated that Iran poses no threat to any state, especially to its neighbor Turkey. Turkey's measure will only lead to more political isolation.

Iran, for its part, has taken all possible measures to strengthen the joint borders and these measures have not been directed against its neighbor. Besides this, the political analyst said, international legislation binds any country to act in concord with its neighbor in the areas of joint borders. It should not only notify its neighbor of a certain activity at the border but obtain its agreement for it.

Turkey Strengthens Syria Border to Cut Daesh Trade, Recruits - Moscow
In this particular case, according to international legislation, Turkey should have got the agreement of the Iranian authorities for the construction of a wall along the joint border with Iran. However it has failed to do so.

Hassan Hanizadeh also noted that it is a highly costly measure, which still won't guarantee any security in Turkey. Iran therefore is calling for dialogue with Turkey on the issue. The political analyst recalled that the two countries are successfully cooperating on a number of issues, such as the recent Syrian peace talks in Astana, where both Ankara and Tehran supported Russia's initiative on the setup of de-escalation zones in Syria.

With regards to Turkey's security and construction of the wall on the joint border, Ankara should be more rational, patient and should not rush to act on its own. It should talk to its neighbor Iran and get its agreement, he finally stated.