Trump Declares Electromagnetic Launch Platforms on US Carriers ‘No Good’ 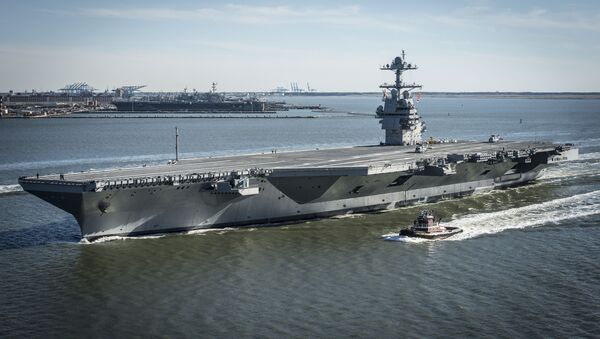 Electromagnetic Aircraft Launch Systems (EMALS) replace traditional steam catapults aboard the newest US aircraft carrier and potential future Ford-class warships. In an interview with Time, Trump rehashed a conversation he had with a representative from General Atomics on why the president thinks that’s a bad call.

“I said what system are you going to be [using] – ‘Sir, we’re staying with digital,’” Trump began. “I said, no you’re not. [You’re] going to goddamned steam.”

Trump then alleged that not only does the new system cost far more than existing technologies, but that it was “no good” to boot.

“It sounded bad to me. Digital. They have digital. What is digital?” Trump wondered.

Trump then claimed only Albert Einstein could figure out how to use digital technology to replace the steam-powered launch system for the next generation of Ford-class carriers.

The Navy has defended implementing EMALS on the grounds that, over the course of the Ford’s 50-year service life, it would cut $4 billion off of maintenance costs.

Relying on steam also means rebuilding the innards of the Ford, which is constructed without pipes to carry steam from turbines to the runway. Carrying out Trump’s command would require a whole new network of pipes to be installed in the Ford, while scrapping miles of electrical cables currently in place for EMALS.

Indeed, “refitting the Gerald R. Ford with steam would cost hundreds of millions (if not billions) of dollars,” Popular Mechanics reported. The ship is already more than 20 percent over budget, at a cool sticker price of $12.9 billion.