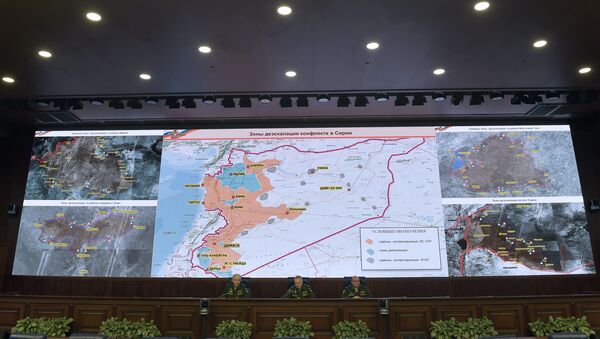 Russian Deputy Foreign Minister Mikhail Bogdanov stated that the United States could be a member of the working groups on de-escalation zones in Syria.

Russia Registers 9 Truce Violations in Syria, Situation in Safe Zones 'Stable'
MOSCOW (Sputnik) — Russia does not rule out that the United States will become a member of the working group on de-escalation zones in Syria, this issue is under discussion, Russian Deputy Foreign Minister Mikhail Bogdanov told Sputnik.

"I do not rule it out," Bogdanov said when asked whether the United States could be a member of the working groups.

He added that the contacts were underway with the US side.

Russia in Talks With Possible Observers for Syria Safe Zones, FM Lavrov Says
The deputy foreign minister added that other countries, especially those who participated in Astana peace process as observers, may join these talks.

"Our minister travelled to Washington, and we have contacts on other levels with our US partners," Bogdanov added.

The Kazakh capital of Astana has hosted four rounds of Syria peace talks so far, on January 23-24, February 15-16, March 14-15 and May 3-4. An agreement on the establishment of a joint monitoring group to track the ceasefire violations was reached and a memorandum on de-escalation zones was worked out. Four safe zones include the province of Idlib and seven other regions.