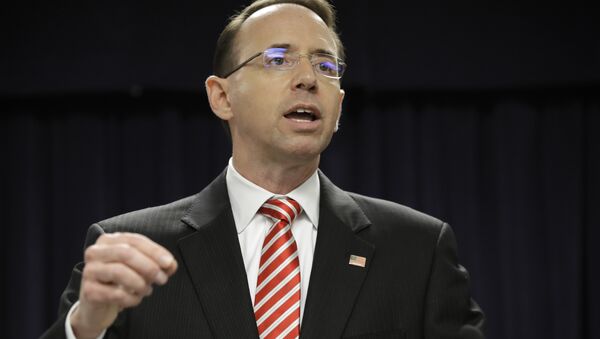 US Deputy Attorney General Rod Rosenstein will brief the Senate on the dismissal of FBI Director James Comey, the office of Senator Chuck Schumer said in a statement on Friday.

WASHINGTON (Sputnik) — According to the statement, Rosenstein has agreed to brief the full Senate next week on the firing of Comey.

"Deputy AG [Attorney General] Rosenstein's office has confirmed to Sen[ator] Schumer's office that he has agreed to brief the full Senate next week," spokesperson Matthew House stated on Twitter.

Earlier in the day, US Senate Judiciary Committee's members sent a letter to Rosenstein and Acting FBI Director Andrew McCabe asking them to hold a briefing before the panel.

On May 9, the FBI director was fired because, according to the administration of US President Donald Trump, he mishandled the probe into Hillary Clinton’s use of a private email server during her term as Secretary of State. Trump fired Comey based on the recommendation of both Deputy Attorney General Rod Rosenstein and Attorney General Jeff Sessions.

‘Witness Intimidation’: Trump May Have Crossed Legal Lines With Comey Tweet
Trump scolded Comey in a letter announcing his dismissal, stating, "You are not able to effectively lead" the FBI. As such, a change in leadership was necessary to rebuild trust between the White House and law enforcement.

Trump came under fire for terminating Comey amid an active investigation into Russia's alleged meddling in the US elections and Trump campaign collusion with Moscow.

To date, there has been no evidence of any interference.