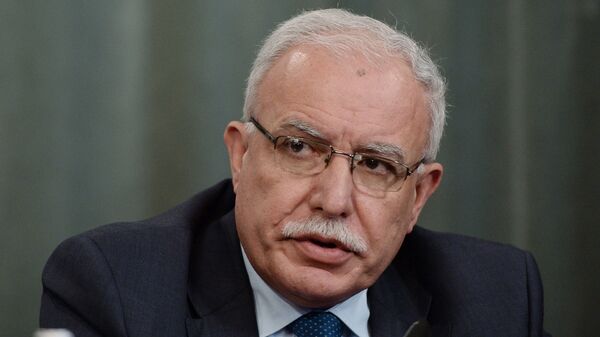 © Sputnik / Maksim Blinov
/
Go to the mediabank
Subscribe
International
India
Africa
Palestinian Foreign Minister Riyad Maliki stated that the Palestinian side is open to a trilateral meeting with Israel and Russia in any location.

MOSCOW (Sputnik) — The Palestinian side, in particular, National Authority's President Mahmoud Abbas, is ready to hold trilateral talks with Israel and Russia in any place in the world, Palestinian Foreign Minister Riyad Maliki said Friday.

"The Palestinian side is open to any location [for negotiations] to ensure peace in the region and to stop suffering of the Palestinian people. We are open to a trilateral meeting in any location… Abbas confirms he is ready to go anywhere in the world," Maliki said.

"Israeli Prime Minister [Benjamin] Netanyahu earlier agreed to such a meeting, but then refused to attend at the last moment. It seems that he is not ready for it. The problem is not in the Palestinian side, which is ready to participate in a meeting at the invitation of [Russian President Vladimir] Putin or any other leader, the problem is in the Israeli leadership, which is trying to make it look like they are ready for meetings and consultations, whereas in reality they are against it," Maliki said.

On Thursday, Abbas said at a joint press conference with Putin that Palestine welcomed the invitation to hold a trilateral meeting in Moscow. On Tuesday, the Palestinian president said that his country was ready to meet the Israeli side in the United Sates as well.

Abbas: Palestine 'Appreciates Russia's Efforts to Counter Terrorism', Help Syria
Putin suggested a meeting of Israel and Palestine in Moscow as early as in 2016, with both sides stating that they supported the idea in principle. However, the meeting has not taken place yet. In March of this year, Russian Deputy Foreign Minister Mikhail Bogdanov told Sputnik that Moscow's offer to host the talks remained on the table.

The relationship between Israel and Palestine has been strained for decades, punctuated by several armed conflicts. The territorial dispute, including the control over Jerusalem, which both countries claim as their capital, and Palestine's struggle for sovereignty are at the heart of the conflict between the two. Many world's politicians have stressed that the only viable solution to the conflict is a co-existence of two independent states, also known as a two-state solution.