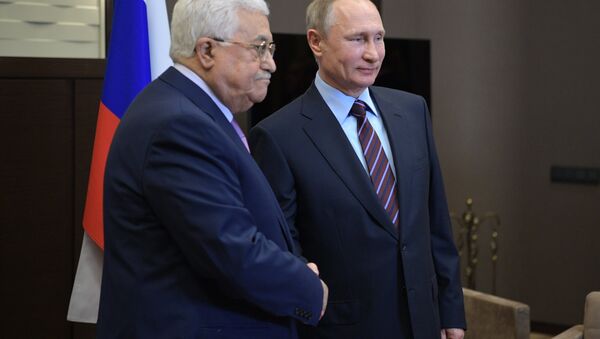 World
Abbas, Putin Held No Talks on Arms Supplies at Sochi Meeting – Palestine FM
MOSCOW (Sputnik) – Putin and Abbas met in the Russian Black Sea resort of Sochi on Thursday and discussed bilateral relations and the Israeli-Palestinian settlement, among other pressing issues.

"The meeting was very good and took place in a warm and friendly environment. It lasted for four hours… The main issue at the talks was related to the bilateral relations and the prospects for their development. Abbas also spoke about his recent visit to Washington and impressions of the meeting with the US administration headed by Donald Trump," Maliki said.

According to the minister, Russia-Palestine bilateral relations are steadily developing.

"The leadership of the Russian Federation and Palestine seek to continue consultations on all issues of mutual interest. Mahmoud Abbas visits Russia once or twice a year to coordinate positions, we also accept Russian high-ranking representatives… Moscow plays a very important role in the settlement of the Palestinian-Israeli problem," Maliki added.

Palestine is engaged in a decades-long conflict with Israel. The Israeli government refuses to recognize Palestine as an independent political and diplomatic entity and continues to build settlements within occupied areas, despite objections from the United Nations.

Russia, as a member of the Middle East Quartet, along with the United Nations, the United States and the European Union, has repeatedly called for the revival of the Israeli-Palestinian talks.