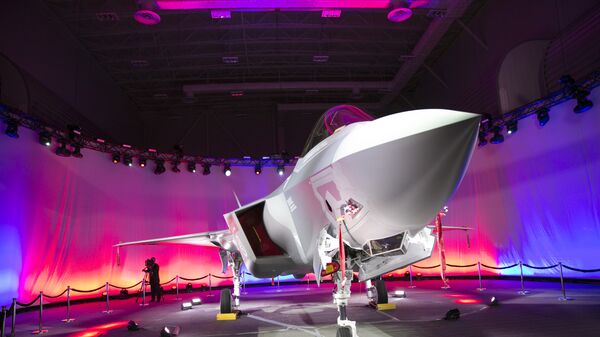 © AFP 2023 / LAURA BUCKMAN
Subscribe
International
India
Africa
In Norway, the acquisition of F-35 US fighter jets has long been an infected issue. Norwegian defense bosses, who were previously severely criticized for extravagance, may ultimately redeem themselves with a likely reduction of the total bill.

As Pentagon Orders Review of F-35 Costs, Norway Gears Up for New Fleet
As one of the eleven countries to have joined the F-35 program, Norway is expected to purchase 52 of the 3,200 or more F-35s slated for production by US manufacturer Lockheed Martin. Norwegian defense officials have been a bit shaky about the final bill for the ill-fated fighter jets, whose development was marred by procrastinations and spiraling costs, so it goes without saying that they were cheered up by the prospect of a rebate following US President Donald Trump's tweets.

After only a month in power, Donald Trump produced a series of tweets, which are believed to have led to a significant decrease in F-35 bills for all interested parties.

Early in 2017, the Norwegian government estimated that the aircraft will cost Norwegian taxpayers 71.5 billion NOK ($8bln). However, the price tag is still somewhat uncertain. By February, the Norwegian Defense Ministry announced that recent development would yield a 7.3 percent price reduction for Norway. According to the Norwegian daily Dagbladet, Trump's angry tweets about the costs of the F-35 program being "out of control" will save Norway an extra 386 million NOK ($44bln) on the six F-35 jets due for delivery in 2018.

Price Wars: Norway's Defense Minister Under Fire Over Costly F-35 Fighter Jets
The Norwegian F-35s are to be delivered over the course of several years and will be manufactured in different production rounds. For each of them, the F-35 program member states negotiated a new contract with Lockheed Martin. The series of aircraft to be delivered in 2018 consists of a total of 90 pieces and is the tenth production series. Of these 90 combat aircraft, Norway will buy six pieces.

With every new round of production, the "Norwegian" price has sunk steadily. This has several causes, including the volume and the efficiency of production. The price decline was welcomed by Defense Minister Ine Eriksen Søreide, but was also expected, the Defense Ministry said, also predicting a continued downward trend.

Norway Bets on F-35 to Attack Targets in Russia
According to State Secretary Øystein Bø, participants in the F-35 program, including the Norwegian defense company Kongsberg, have always contributed to price reduction initiatives.

While the Norwegian Defense Ministry would not support the idea that more-than-welcome price reduction was rooted in Trump's scathing criticism, Trump himself eagerly took credit for the cost cuts. In an April interview with the Associated Press, Trump claimed his Twitter haggling to have saved Japan $100mln.