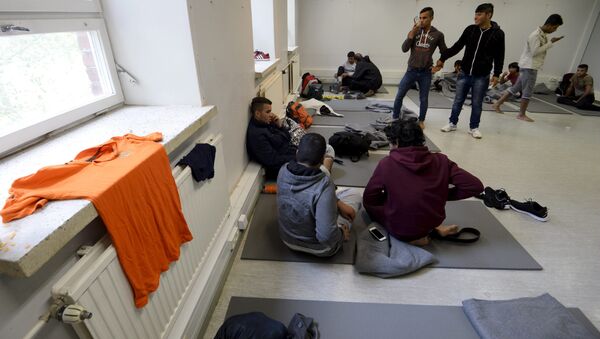 © AP Photo / Ulander/Lehtikuva
Subscribe
Refugees and illegal immigrants are increasingly engaged in prostitution in Finland. While the exact extent of the shadow market remains to be estimated, this phenomenon is getting increasingly popular, as selling sex has proven to be a real way of earning money.

Uganda Schools Well-to-Do Finland on Integration of Refugees
According to the Finnish newspaper Helsingin Sanomat, about 70 percent of all workers in the sex market are foreigners, but recently asylum seekers and illegal immigrants have joined their ranks.

Finnish researcher Niina Vuolajärvi cited financial difficulties as the foremost reason pushing refugees to the streets. According to her, migrants in Finland often have two alternatives, to seek employment in the shadow economy for a measly pay of several euros per hour or go into prostitution, which is paid much more generously.

Helsingin Sanomat's journalist went underground together with Iraqi "Kadar," who has lived in Finland for several years. By his own admission, he got involved in prostitution by accident. Only two months after his arrival in Finland, he was approached by a Finn who offered him 50 euros for a sexual intercourse. Kadar agreed, since this was equal to half his monthly allowance at the accommodation center. Apart from replenishing Kadar's wallet, however, this event also gave him gonorrhea.

Desperate Refugee Kids Selling Sex to Survive in Norway
Nevertheless, Kadar went on making money selling himself after the accident, only using precautions. By his own admission, he started two profiles in the social media, where he got in touch with fellow refugees in the same business. Since then he has had 15 regular customers, all men. Kadar's usual fee varies from 50 to 60 euros.

Needless to say, asylum seekers involved in prostitution are trying to hide their occupation, because their culture strongly condemns such interaction. Another reason is the rebuke of fellow tenants at refugee accommodations.

Since 2015, 38,000 asylum seekers have applied to the Finnish authorities, and about 19,000 still reside in refugee accommodations anticipating a decision. About 11,000 have already been denied residence permits. According to an earlier estimate by Interior Minister Paula Risikko, hundreds of them will remain in the country illegally. So far, the Finnish authorities have lost track of about 4,000 asylum seekers, many of which are believed to have traveled to another country.

Finland Paves Way for Mass Deportations of Migrants, Igniting Protests
The number of illegal immigrants slated for expulsion may increase further, as Finland seems to have commenced procedures to deport asylum seekers back to the Middle East. Dozens of special flights have been arranged since the beginning of 2016. The most recent wave of expulsions, though, stirred strong reactions, triggering bitter criticism from both human rights activists and the deportees themselves. In recent weeks, parts of Helsinki have turned into areas of perennial demonstrations by advocates of humanitarian immigration and their opponents.