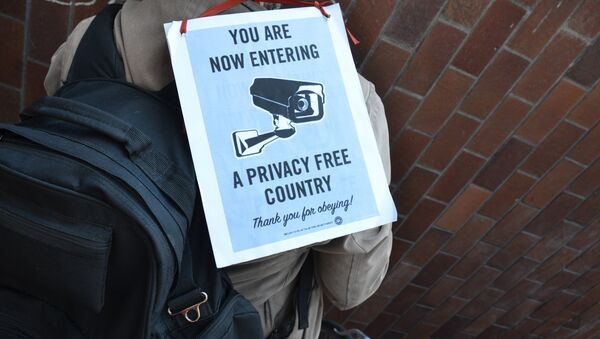 A newly-released court opinion shows that the US National Security Agency (NSA) has gathered digital data about US citizens for years in potential violation of the Fourth Amendment. Speaking to Radio Sputnik, former FBI Special Agent Mark Rossini noted that he understands the Americans' fear of this powerful agency.

The newly released Foreign Intelligence Surveillance Court's (FISC) memorandum opinion and order indicates that the US National Security Agency (NSA) might have illegally surveilled American citizens for years in potential violation of the Fourth Amendment.

"Since 2011, the NSA's minimization procedures have prohibited the use of US-person identifiers to query the results of upstream Internet collection under Section 702 [of the Foreign Intelligence Surveillance Act]. October 26, 2016, Notice informed the Court that NSA analysts had been conducting such queries in violation of that prohibition, with much greater frequency than had previously been disclosed to the Court," the document said.

Moreover, the NSA acquired so-called "Multiple Communication Transactions" (MCTs) believed to be groups of emails and metadata of the US nationals as part of its "upstream" collection.

What is more embarrassing is that the NSA upstream collection acquired Internet communications that were not only "to" or "from" the intelligence agency's target but also "about (i.e., containing a reference to) a selector tasked for acquisition under Section 702."

NSA Just Changed How It Will Gather Intelligence Under FISA 702
"As a result, the upstream collection could acquire an entire MCT for which the active user was a non-target and that mostly pertained to non-targets, merely because a single discrete communication within the MCT was to, from or contained a reference to a tasked selector," the memorandum opinion highlighted.

The court opinion suggested that the NSA shared this sensitive information with the CIA, FBI and the other intelligence agencies and ordered the agency to delete the improperly collected data on unsuspecting American citizens.

Speaking to Radio Sputnik, former FBI Special Agent Mark Rossini underscored that he understands the Americans' fear of such a powerful agency as the NSA.

"People also must be aware that the collection by the NSA of the MCTs was not done intentionally," Rossini remarked. If the agency had the intent to collect this information on a certain American, then that would constitute a crime, he noted.

Therefore, it is important to confirm that whatever was collected had never been used for nefarious purposes.

"That's the fear and I understand the fear of a powerful agency like the NSA," he said.

Given the possibility that the Fourth Amendment could have been violated, a deep review of what was collected and what was done with that information is needed.

"That's really the key to the further investigation that is probably still going on right now… And once we know that, then someone can be criminally charged with committing a violation of the law," Rossini told Radio Sputnik.

Old Habits Die Hard: US 'Still Spies on Brazil' Despite Outrage Over NSA Scandal
The question then arises: What would be the implications for the NSA?

"The NSA is a real enigma and an extremely complex and secretive agency," the former FBI agent noted. "They collect all data and have huge supercomputers to crunch and analyze the data to produce reports for the President and, of course, for the other agencies, to act upon. It operates in total secrecy."

"Perhaps, that is needed," he believes, "because when you disclose exactly how they do and what they do, which is also the danger of [former NSA contractor Edward] Snowden who revealed the code how they collect the data. I don't believe we actually really need to know how they operate. We just need to know that they do not violate people's rights or use the information that they gather to target [American] people for political or personal vendettas."

Nevertheless, according to Rossini, the latest release of the court opinion is in every respect a positive development.

"The public has to understand… that the Court is the last stand, if you will, for justice… and it shows the integrity of the system where the Court steps in [to exercise] its authority and without that, we would have agencies running amok," he underscored.

Be Aware: NSA's Hacking Tools Being Used for 'Mass-Scale Attacks'
"What I want the people to take away from that… is that, thank God, we still have the ability, in the US at least, to do that. And this should be again be looked upon as a favorable issue," Rossini highlighted.

Interestingly enough, ahead of the release, on April 29 the NSA signaled that it had stopped its controversial surveillance practice that allowed the agency to collect the Internet communications of US citizens who mentioned a foreign intelligence selector in their messages.

NSA also promised to delete the "vast majority" of collected Internet data "to further protect the privacy of US person communications."

.@charlie_savage This is likely the most substantive of the post-2013 NSA reforms, if the principle is applied to all other programs. https://t.co/j4Mir6GoYA

Commenting on the matter, Edward Snowden, who leaked controversial NSA techniques back in 2013, pointed out that "this is likely the most substantive of the post-2013 NSA reforms if the principle is applied to all other programs."