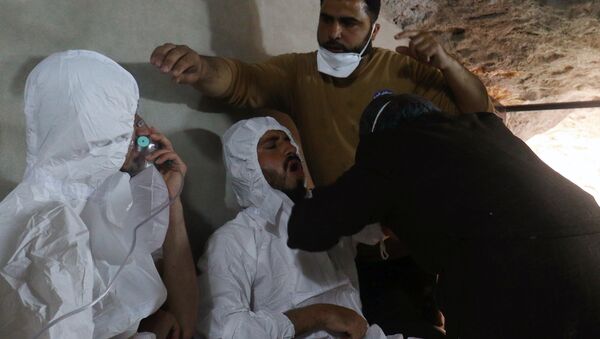 Syrian President Bashar called the Idlib chemical attack in Syria "a cover up for the American intervention" in the country, which President Donald Trump intended to use to get support in his home country amid various conflicts with the members of the US establishment.

MOSCOW (Sputnik) — Allegations of a chemical attack in Khan Sheikhoun in Syria's Idlib province is part of a campaign to demonize the country's authorities and a cover for the US intervention in Syria, Syrian President Bashar Assad said in an interview with Belarus’ ONT channel on Thursday.

As Washington Arms Kurdish Fighters in Syria With Heavy Weapons, What of Turkey?
"Of course, it was part of the campaign waged on Syria with the aim of demonizing the Syrian state… After they failed in marketing their policy towards ISIS [Daesh] and al-Nusra through their support of these two organizations directly or indirectly… they wanted to wash their hands of the subject and to show that the problem in Syria is not ISIS and al-Nusra but the state which is killing its innocent citizens by using toxic gases," Assad said as translated and quoted by the Syrian state-run SANA news agency, when asked about the nature of the chemical attack.

The Syrian president added that the chemical attack was also "a cover up for the American intervention in Syria" as US President Donald Trump was facing conflicts within his administration as well as with other forces, lobbies, media and corporations in the United States.

"So by doing that, he wanted to present his credentials to these groups. The chemical attack issue is also a justification for this intervention," Assad said.

He also noted it was a "planned process" aimed to achieve a number of goals at the same time.

"Russia and Iran presented a draft proposal to the Organization for the Prohibition of Chemical Weapons (OPCW), and they refused to approve an investigation, because it will prove only one thing, that they were lying," the Syrian president said.