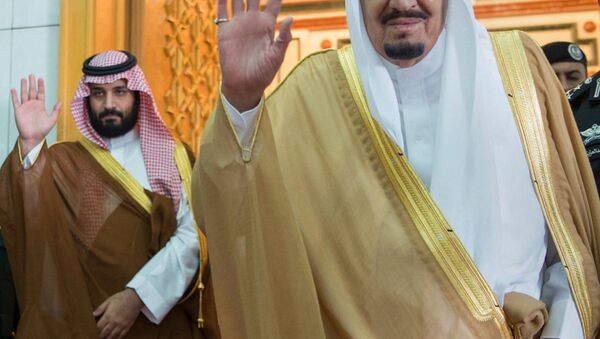 © AP Photo / Saudi Press Agency
Subscribe
UK Defense Secretary Michael Fallon has defended the Saudi-led coalition's bombing of Yemen. The British government's official position has always been to support the two-year campaign to oust Houthi rebels in Yemen, despite numerous human rights atrocities, including those committed against civilian children, as well as the use of banned weapons.

Yemen is collapsing under the combined burden of a protracted civil war and a public health famine crisis.

UNICEF estimates that a child dies every 10 minutes from preventable causes. 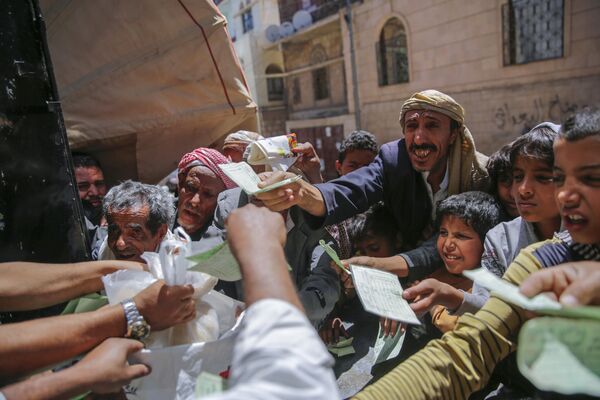 The Saudi-led coalition is blockading Yemeni ports, preventing the import of vital aid supplies, and forces loyal to both sides have been accused of bombing and firing on hospitals and schools.

The International Committee of the Red Cross says there have been more than 160 attacks against medical facilities and personnel in the past two years. 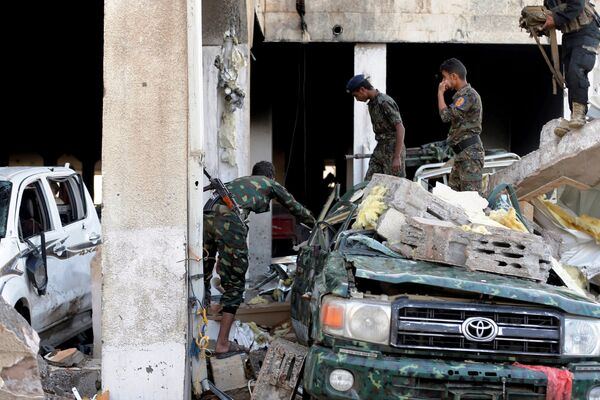 Men inspect the site of an airstrike which witnesses said was by Saudi-led coalition aircraft on mourners at a hall where a wake for the father of Jalal al-Roweishan, the interior minister in the Houthi-dominated Yemeni government, was being held, in Sanaa, Yemen October 8, 2016.
© REUTERS / Khaled Abdullah

According to Mr. Fallon, Saudi Arabia is "just defending itself."

The brazen simplification of a complex conflict, with multiple international powers engaged by proxy — including Saudi Arabia, Iran, the US and the UK — will unlikely deter human rights organizations who have been highly critical of the conflict.

Saudi Arabia quickly intervened with a coalition of nine Arab states, backed by the UK and US.

Meanwhile, the Saudis have labeled the Houthis as Iranian proxies, an accusation Tehran continues to vehemently denied.

In April 2017, two human rights groups — Save the Children and Watchlist — called on the UN to put Saudi Arabia back on a list of violators of children's rights.

However, with weeks to go until the 2017 UK election, Sir Michael re-stressed the Conservative government's position that Saudi Arabia is an "enormously important trading partner," and refused to clarify whether his party will halt arms sales to the Saudis.

"We share intelligence with Saudi Arabia about terrorism. We gain from that relationship. Every arms export application is very carefully looked at and judged by our criteria — some of the toughest in the world. But Saudi Arabia, equally, is entitled to defend itself," he said.

Meanwhile, Labour leader Jeremy Corbyn is believed to be in favor of banning arms sales to regimes the party deems repressive, including Saudi Arabia.

The issue has exposed the UK to accusations of hypocrisy.

My cartoon — where does defence secretary Michael Fallon draw the line with Saudi Arabia?#GE2017 #r4Today pic.twitter.com/4ab4PYX4ib

Michael Fallon's defence of the Saudi war in Yemen is stomach-churningly disingenuous. This is not a war of self-defence.

Since 2010, the UK has sold arms to 39 of the 51 countries ranked "not free" on the Freedom House "Freedom in the world" report. Freedom House is a US-based human rights organization.

And in December 2016, Sir Michael confirmed that British-made cluster bombs, which are illegal under international law, have been used by Saudi Arabian forces in Yemen.

The bombs were manufactured before the UN's Convention on Cluster Munitions was adopted in 2008.

According to Human Rights Watch, cluster bombs "pose a threat post-conflict by leaving remnants, including submunitions that fail to explode upon impact becoming de facto landmines."

The UK government has said that the UK no longer manufacturers or sells cluster bombs.

According to UK Trade and Investment, Britain is the second biggest arms exporter in the world, worth billions of pounds every year.