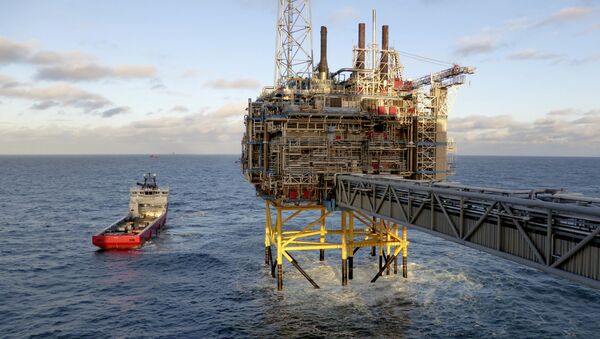 Norway, one of Europe's foremost oil producers, intends to offset the ongoing economic slump by new drilling projects, provoking criticism among its own environmentalists. According to a recent report, the current Norwegian government has not listened to a single piece of ecological advice since entering office in 2013.

Norwegian Tycoon to Save the Sea From Plastic With Billions Made From Oil
According to the report by the Norwegian Society for the Conservation of Nature, Erna Solberg's Conservative government has received 33 pieces of advice from the Environmental Agency without following a single one since it took over in 2013. The previous governments, led by then-Labor Party Leader Jens Stoltenberg, were scarcely better: they rejected 189 out of 237 such reports during their tenure from 2006 to 2013.

"When the Conservatives call themselves a party of knowledge, it is remarkable that they nevertheless consistently refuse to listen to advice from environmental experts. The situation has never been so bad," Silje Ask Lundberg, the head of the Society for the Conservation of Nature, said, as quoted by Norwegian national broadcaster NRK.

According to Lundberg, both the incumbent government and its predecessors have the habit of "letting oil politics dictate both environmental and climate policies."

Norway Doubles Oil & Gas Resource Estimates Amid Mounting Int'l Pressure
The reason for the environmentalists' rage is that the Norwegian government last week green-lit 87 drilling locations in the Norwegian Sea and the Barents Sea. Two of them are dangerously close to an area where the Norwegian Environment Agency specifically warned against drilling. Even the Institute of Marine Research has opposed drilling projects in this area, which is home to large colonies of seabirds and marine mammals and is an important breeding ground for fish.

The recent years' decline in the oil industry has cost 45,000 jobs in Norway alone. At present, around 250,000 Norwegians (out of the country's total population of 5.2 million) work in the oil industry. Since the discovery of vast deposits in the Norwegian Sea in the 1960s, oil and gas have been Norway's foremost exports. In 2016, the export value of crude oil and natural gas in 2016 was about 350 billion NOK ($40.5bln), which amounted to approximately 47 percent of the total value of Norway's exports of goods. Therefore, it is no wonder that the government keeps betting on its workhorse to boost the ailing economy.

Norway Invests Billions to Milk Dry Old Oil Deposits
Norwegian Oil Minister Terje Søviknes called the distribution of new exploration areas a "pillar" of the government's petroleum policy. According to him, maintaining exploration activity is vital for future employment, growth, income and welfare for many Norwegians. Søviknes also stressed the fact that a broad majority in parliament supported the current policy of expanding drilling sites. Unsurprisingly, he also assured that all environmental considerations have been "taken into account."

In late April, Norway doubled its estimates of undiscovered oil and gas resources in its region of the Barents Sea in a formerly disputed area bordering Russia. Consequently, a new forecast by the Norwegian Petroleum Directorate predicted about 2.8 billion standard cubic meters of oil equivalent (17.6 billion barrels) to be tapped in the Barents Sea, double the previous estimate of 1.4 billion.