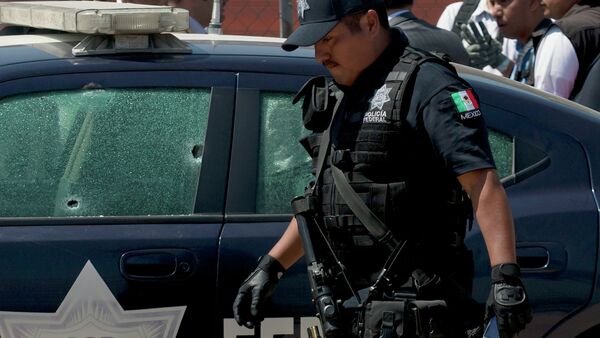 © AFP 2021 / FRANCISCO VEGA
Subscribe
A new global survey has named Mexico the second deadliest area in the world after Syria, due to the Central American nation’s violent ongoing drug war.

Syria’s six-year war came in first for most dangerous conflict for the fifth consecutive year, as 2016 saw 50,000 casualties in the area, by some estimates.

According to the The Armed Conflict Survey 2017, an annual report analyzing global conflicts and casualties, there were 23,000 deaths in Mexico in 2016 connected to the fight against drug cartels. Published Tuesday by the International Institute of Strategic Studies (IISS), the survey found that "scant attention" has been paid to Central American drug wars, with 16,000 deaths combined coming from Honduras, Ecuador and El Salvador.

IISS Director General and Chief Executive John Chipman said in the report, "The death toll in Mexico’s conflict surpasses those for Afghanistan and Somalia. This is all the more surprising, considering that the conflict deaths are nearly all attributable to small arms. Mexico is a conflict marked by the absence of artillery, tanks or combat aviation."

According to the report, 80 percent of casualties worldwide could be attributed to just 10 conflicts in Nigeria, Yemen, Afghanistan, Mexico, Iraq, Sudan, Somalia, South Sudan, Turkey and Syria.

The arrest of cartel leaders from brutal groups like Los Zetas helped contribute to a drop in Mexico’s homicide rate in the three years between 2011 and 2014. In 2015, the number crept back up, and men in Mexico saw three years shaved off their life expectancy.

The New Generation Cartel, a rival to Joaquin “El Chapo” Guzman’s Sinaloa organization, was also noted in the report, with IISS researcher Antonio Sampaio writing in an IISS article, "The cartel is pursuing a sustained strategy of hyper-violent criminality, designed to scare local people, deter rivals (including the state) from attempting territorial grabs and maximise the incentives for businesses to pay extortion taxes."

Sampaio also noted that, "It is very rare for criminal violence to reach a level akin

Son of Sinaloa Drug Cartel Leader El Azul Escapes From Prison
to armed conflict. But this has happened in the Northern Triangle of Central America (Honduras, Guatemala and El Salvador) and, especially, Mexico. In all four countries, armed forces have been deployed for many years specifically to fight criminal gangs and, in the case of Mexico, transnational drug-trafficking cartels, with military-grade weapons and vast financial resources."

A 2016 article in the Health Affairs journal analyzing this trend stated, "The unprecedented rise in homicides after 2005 led to a reversal in life expectancy increases among males and a slowdown among females in most states in the first decade of the 21st century."