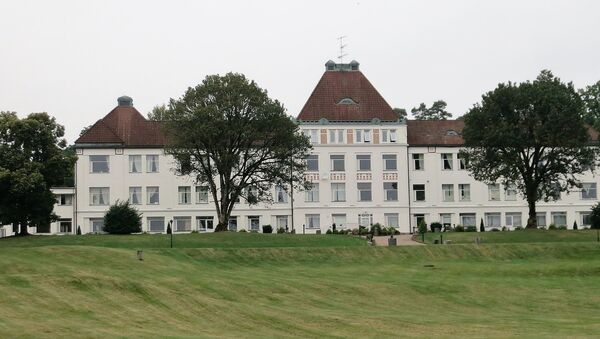 Asylum seekers lodged within the Swedish castle of Lia Hof outside the town of Falkenberg have asked the Swedish Migration Board to stop its plans to close down its luxury accommodation.

Swedes' Gifts to Migrants Tossed Away as Spa-Turned-Asylum Closes Down
Dissatisfied asylum seekers protested their coming eviction by signing a petition against the Swedish immigration authorities' plans to close down the luxury accommodation within a month, Swedish national broadcaster SVT reported.

"We are collecting signatures because people do not want to move from here. Many families have children going to school here and changing schools is always difficult. Everybody has struck roots here in society and it is difficult for them to move," Fatima Hujaj, one of the residents, complained to Swedish Radio.

Her neighbor Imran also ventured that such a move would be detrimental for integration.

"They have to leave their jobs and go somewhere where they do not know anyone. It will be very difficult to find a new job. This decision turns people's lives upside down," Imran told Swedish Radio.

​Lia Hof, also known as Liagården, was built in 1912-14 and operated as a health care institution for decades, serving as a sanatorium for the treatment of tuberculosis until 1958 and as a mental home until 1995. In 2011, the place was refurbished as a hotel, only to be re-purposed to accommodate asylum seekers.

In December 2012, shortly before Lia Hof opened as an asylum operation, Gustav Kasselstrand, the then-chairman of Sweden Democrats youth wing SDU, drew nationwide attention to Lia Hof with a much-debated film, depicting his own experience as an asylum seeker in the sumptuous castle-like environment.

In 2014, the Migration Board's asylum housing program was found out to have created unreasonable gains for private contractors. Lia Hof itself received 20.8 million SEK ($2.3mln) from the authorities, which was ued to establish a spa and a conference facility, SVT reported.

Sweden to Pay Millions for Empty Would-be Floating Refugee Accommodation
As the asylum chaos broke out in the autumn of 2015, Sweden was facing the largest wave of immigration in its history. The Nordic nation of 10 million took in a record 163,000 asylum seekers, receiving thousands of people on peak days. To house all the newcomers, extra accommodation had to be provided urgently. Sweden tried housing the newcomers in tent camps, schools, former military barracks, hotels and private villas.

After a relative "calm" in 2016, when less than 30,000 asylum seekers arrived in Sweden, the authorities started closing down some of the most extravagant accommodations.

According to the recent forecast by the Migration Board, between 22,000 and 45,000 asylum seekers are expected to arrive in Sweden in 2017.