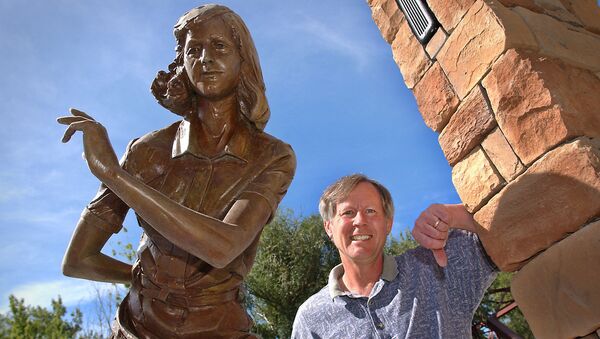 On Tuesday, it was discovered that an Anne Frank memorial in Boise, Idaho, has been vandalized with racist and anti-Semitic messages.

Disgraced Reporter Arrested for Terrorizing Jewish Community Centers
The graffiti on Boise’s Anne Frank Human Rights Memorial, written with a permanent marker, was reportedly so bad that the tablets will need to be replaced, which the city estimates will cost $20,000.

“Both tags appeared to have been written on with a permanent marker, which was bleeding into the stone,” the Idaho Statesman reported. “Both tablets will have to be replaced, he said. In removing the tags, Boise’s Parks and Recreation Department used chemicals that also removed ink from the tablets’ engraved lettering. Those letters are too shallow to be re-inked.”

In addition to anti-Semitic slurs, the vandal also wrote that black people aren’t human, underneath the first paragraph of the Universal Declaration of Human Rights.

"While we are deeply disheartened by this senseless destruction, this use of divisive and demeaning language only emboldens our mission," The Wassmuth Center for Human Rights wrote in a Facebook post. "Promoting human rights in our community is more important now than ever, and an act of vandalism such as this demonstrates the need for Boiseans to recommit themselves to ensuring all our schools and institutions are safe and welcoming for every member of the human family. They can deface the Universal Declaration of Human Rights tablet, but they can’t destroy its message of human dignity."

Unhappy Ending: 1925 Book Inscribed by Anne Frank Acquired by US Museum
The Boise Police Department is investigating the vandalism, but so far they do not have any suspects. There are no surveillance cameras in the park where the memorial stands.

The Anne Frank Center for Mutual Respect in New York City issued a statement about the vandalism, calling it “unfathomable evil.”

"This act of unfathomable evil demonstrates how we, as a society, have not yet reached the world of Anne Frank's dreams," Steven Goldstein, executive director of the center, wrote in the statement. "That's why our organization now focuses so strongly on contemporary injustice. It is on us, or Aleynu as we say in Hebrew, to take a stand for goodness in today's world just as Anne asked all of us to do in her diary. Never forget and never again, so help us God."