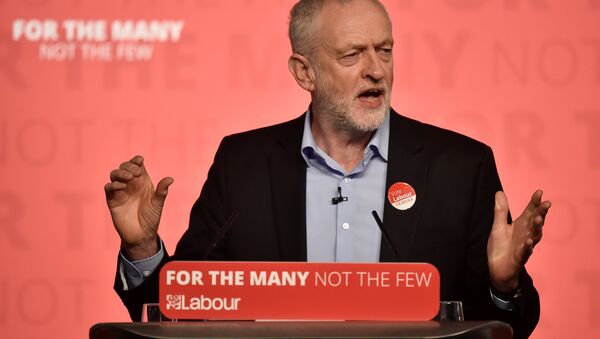 Neil Clark
All materials
Don't mention the war! That classic line from the Fawlty Towers episode "The Germans" has had us laughing out loud for the past four decades. But not mentioning the war - or to be more accurate "wars" - is the very last thing Labour leader Jeremy Corbyn should be doing right now.

The May 4 local election results, while not the disaster for Labour depicted in much of the media, nevertheless demonstrated to Corbyn the uphill task he faces in order to become Prime Minister on June 9.

If a Labour victory is not "Mission Impossible," it's certainly "Mission Bally Difficult," as the fictional hero Captain James Bigglesworth — a man known for getting out of some pretty tight scrapes — might say. Here's one way Corbyn can "do a Biggles" and turn the tables on his detractors.

Just about the strongest card he has in his hand is one he hasn't yet played. Namely the card marked "Foreign Policy." Put succinctly, "Jezza" has been in the right on foreign policy issues while his opponents, including the "strong and stable" Tory leader Theresa May, have been spectacularly wrong.

Frum was an architect of the Iraq War. Corbyn opposed it in opposition to his own Parties Leader. I know who I trust https://t.co/ZrXpV62osD

The loudest and most vexatious Corbyn-bashers, in politics and the media have, rather revealingly, got one thing in common. They all supported the Iraq War. That's right, the illegal conflict sold to the public on an outrageous lie, which led to the deaths of one million Iraqis, directly caused the rise of Daesh and provoked a massive refugee crisis — and which destabilized not just the Middle East but the entire world.

Now you'd think if you supported such a disastrous venture you'd forever hold your tongue and retire gracefully from public life. But the "Saddam's got WMDs and they're ready to be launched in 45 minutes!" brigade know no shame. They're out there in full public view, attacking Corbyn as if the events of 2003 didn't happen.

While the "sensible" Mrs. May voted "consistently for the Iraq war," the much-maligned Corbyn "consistently" voted against it. Not only that, he was one of the organizers of the anti-war march in London attended by a record 2 million people (myself included).

Jeremy Corbyn didn't just take part in the famous march against the Iraq War. He was one of the inspirations behind the organising of it. pic.twitter.com/UifB3a0dgj

It wasn't just the criminal invasion of Iraq that the Labour leader opposed. He also voted against the imposition of no-fly zones in Libya — which gave the UK and other "humanitarian" NATO powers the pretext they needed to bomb the country with the highest living standards in Africa back to the Stone Age and transform it into a haven for radical Islamists.

The "intervention," the consequences of which have been so utterly calamitous, was fiercely criticized in a House of Commons Foreign Affairs Committee report in 2016, but there was no comeback for those who had voted in favor of military action. One of those was a certain Mrs. Theresa May.

"One can't help but be struck by the rush to military involvement by politicians of all countries and all persuasions," Corbyn noted in a Guardian column on March 21, 2011.

"I can't remember anyone calling for a no-fly zone in Gaza in winter 2008-09 when phosphorous bombs were used against a largely unarmed and defenceless civilian population," he wryly observed.

Going back even further, the very wise Mr. Corbyn also opposed the US-led invasion of Afghanistan in 2001. Think that was a great success? Well, only this week a Wall Street Journal article noted that the Taliban now controls 40% of the country.

In 1999, Corbyn again was one of only a handful of MPs brave enough to oppose the illegal NATO bombardment of the Federal Republic of Yugoslavia. He has — predictably — been attacked by the NeoCon Thought Police for signing an Early Day Motion (EDM) on Kosovo, welcoming a John Pilger New Statesman column (in which I was extensively quoted), and which reminded readers of the "devastating human cost of the so-termed 'humanitarian invasion of Kosovo.' "

The EDM also congratulated Pilger on "his expose of the fraudulent justifications for intervening in a 'genocide' that never really existed in Kosovo." But unlike at Srebrenica, where a genocide did take place, there was no genocide in Kosovo — and Corbyn was right to sign the motion.

Instead of staying silent while cheerleaders for the Iraq War attempt to claim the moral high ground over him, Corbyn needs to go on the front foot and press home his advantage on foreign policy issues. He must remind voters of the disastrous consequences of the illegal regime change wars in the Middle East and elsewhere that so-called "sensible" politicians like Theresa May supported — and which he opposed.

Would there have been Daesh/al-Qaeda terror attacks across Europe — including in Britain — if Iraq had been left alone in 2003? Would British holidaymakers have been slaughtered on the beach in Tunisia in 2015, if neighboring Libya had not become a haven for Daesh/al-Qaeda radicals? The UK's neocon/"liberal interventionist" foreign policy, as well as costing taxpayers a fortune, has put ordinary British citizens at much greater risk than before and Corbyn should make this point very forcefully the next time he is challenged by Establishment gatekeepers as being a threat to "national security."

This is not just a debate about the past, but the future too.

Those 'pundits' smearing Corbyn 24/7 shld be called out for their support for the Iraq War & jihadists in Syria.They're the real extremists.

If the Conservatives do win on June 8 — and with a large majority — then there is a much greater chance of Britain taking military action sometime this summer against the secular Christian-protecting government of Bashar al-Assad in Syria. Foreign Secretary Boris Johnson has already let the cat out of the bag, admitting "it would be very difficult for us to say no" if the US wanted UK support.

While early May, Defense Secretary Michael Fallon — perhaps mindful of Johnson's slip, repeatedly refused to say if Theresa May would try and win parliamentary support for attacks on Assad.

This should give everyone who doesn't live on Planet Neocon and have financial links to the military-industrial complex grave cause for concern. Not only would action against Assad be a great boost to Daesh, and other Salafi-jihadist groups operating in Syria, it would also increase the dangers of a major military confrontation with Russia. Does the British public want to risk getting involved in World War Three in order to satisfy elite desires to topple a leader who poses absolutely zero threat to us?

Corbyn and his team need to warn us of what could lie ahead. The neo-cons haven't gone way — they are still there, in the corridors of power, planning fresh military aggression.

Foreign policy could be the issue that makes the difference between Corbyn falling short on June 8 — and him pulling off a historic against-the-odds win against the Establishment.

Do mention the wars, and who supported them, Jeremy, old chap. It really is your best chance of success.