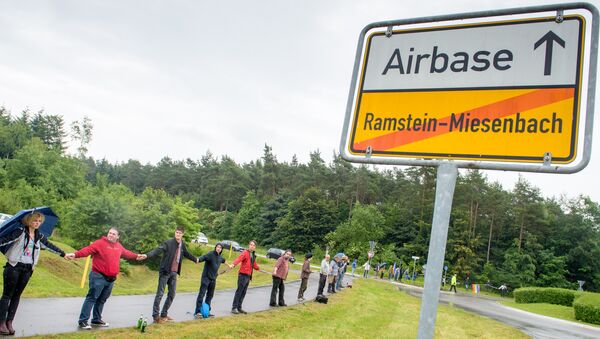 Activists of the German campaign, dubbed Stopp Air Base Ramstein, plan to organize in September a peace festival and demonstrations against a US airbase located near the German town of Ramstein-Miesenbach and used for drone strikes, a campaign's coordinator said Wednesday.

BERLIN (Sputnik) — Ramstein is a US airbase in Rhineland-Palatinate state in southwestern Germany, which also serves as headquarters for the United States Air Forces in Europe and for NATO Allied Air Command. In April 2015, media reports revealed that the base was a center of the US drone program, which uses unmanned aerial vehicles for air strikes in the Middle East and Africa.

"It will be the most massive protests in Germany before the elections to the Bundestag [set for September 24]," Reiner Braun said at a press conference in Berlin, adding that the action would take place on September 8-10.

According to Braun, the campaign would include various cultural and education programs, as well as panel discussions and a "human chain" in protest of the base.

"The peace camp will be opened on September 3. Last year it was attended by 500 people, and I can already say that the number of participants will be doubled," Braun added.

According to the coordinator, the "human chain" is set to be the key event of the campaign. It would connect the city's center with the military base and a memorial installed at the site of the 1988 crash when an aircraft participating in the Flugtag airshow crashed down on the people.

"The second event will be our experiment — a peace festival… The mood of people is changing the direction of supporting a movement for peace, opposing the use of drones. We seek to support this mood with the help of our camp, with the help of a peace festival, which could be attended by grandmothers and their grandchildren, and young people who will not participate in demonstrations," Braun said.

Ramstein Air Base is the largest US facility outside the United States' territory, comprising 15,000 servicemen and 30,000 civilians. The US drone program triggered heated discussions across Germany, with many activists urging to stop it as drone strikes lead to mass casualties among civil population.