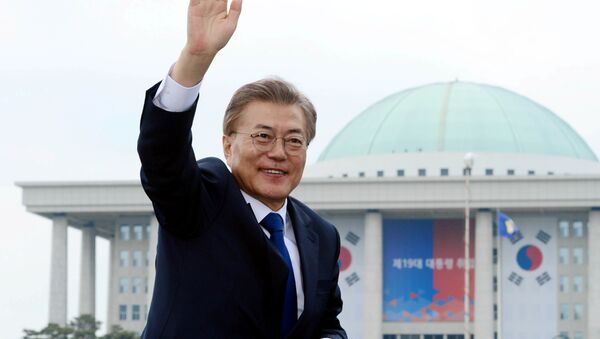 South Korean President Appoints Governor Lee Nak-Yon as PM
SEOUL (Sputnik) — Newly elected South Korean President Moon Jae-in, a former lawyer and current member of the Democratic Party of Korea, was officially sworn in Wednesday during an inauguration ceremony in the South Korean National Assembly, during which he promised to build "a new country."

Moon later added that there were no winners or losers in the election, as everyone would participate in the building of a new South Korea.

The new president received 41.08 percent of the vote in Tuesday's election, which was held earlier than planned due to the impeachment of the former President Park Geun-hye over a far-reaching corruption scandal.

The new president has also reportedly offered Suh Hoon, a veteran intelligence official, to lead the nation's National Intelligence Service, and Im Jong-seok, who was Seoul Mayor Park Won-soon's vice mayor for political affairs, to serve as the presidential chief-of-staff.

Putin Congratulates Moon With S Korea Presidential Election Victory
Moon's Democratic Party needs an additional 30 seats to reach a majority in the National Assembly. In total, South Korea's legislature has 300 seats, which means cooperation with other parties will be necessary to attain the desired majority.

The election of a new president took place amid heightened tensions surrounding North Korea's nuclear and missile tests. In view of this, Moon promised to do everything in his power to maintain peace on the Korean peninsula, and stated that he would be willing to travel to Washington, Being, Tokyo and even, if possible, to Pyongyang.

According to the Yonhap news agency, Moon had already been briefed by Gen. Lee Soon-Jin, the chairman of the Joint Chiefs of Staff, on the state of the country's armed forces.

Lee reportedly told the president that South Korean forces were ready to act if provoked by the enemy.