'I Ain't Afraid of No Ankylosaurus': Dino Named After Ghostbusters Villain 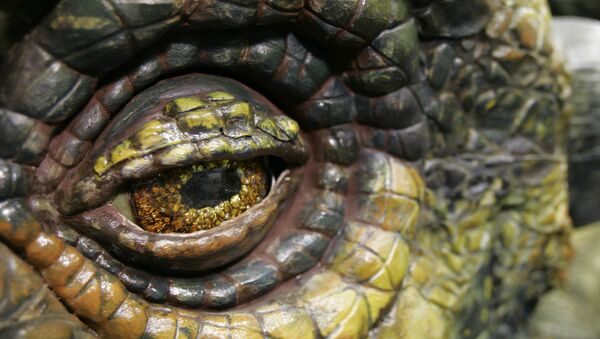 © AP Photo / Ted S. Warren
Subscribe
We all know the famous catchphrase, "If there's something strange in your neighborhood, who you gonna call?" and now the cult film has influenced a group of scientists, who have decided to name a dinosaur after the Ghostbusters villain Zuul.

But don't let the ferocious name fool you, this newly discovered armored dinosaur found in northern Montana wasn't that evil and much more gentle in comparison the fictional creature in the film.

Zuul roamed North America about 75 million years ago and was a herbivore. It was a large Ankylosaurus, one of the armor-plated dinos that resembled tanks.

Its tail ended in a weighty club, according to researchers, and its species name was called crurivastator, which translates to "destroyer of shins."

Scientists decided to name it after the Ghostbuster baddie because they shared similar features, such as a block head and short-snot.

​The specimen was unearthed in 2014. Researchers started at either end of the spectacularly well-preserved skull and tail club, and are working their way toward the middle.

Huge thanks to Ghostbusters writer and star Dan Aykroyd for stopping by @ROMtoronto to meet our new #dinosaur Zuul crurivastator! #DinoZuul pic.twitter.com/pmEwGVHxwf

The work should be completed in two years and the lead author of the project, Victoria Arbour from the Royal Ontario Museum and the University of Toronto thinks that Zuul will measure about six meters or 20 feet.

Meet Zuul crurivastator, the Destroyer of Shins, in my new paper with @DavidEvans_ROM! Find out more here: https://t.co/Me0RvPn0HF #DinoZuul pic.twitter.com/aGK5MsKotS

"It's possible Ankylosaurus used their tail clubs as weapons against Tyrannosaurus, Gorgosaurus or Albertosaurus," Arbour said in a recent interview.

"It could have been bopping its club into the shins of one of these dinosaurs — we're not sure which one yet. But they also could have been fighting each other," she added.

Arbour said that living herbivores with impressive weaponry often use it not as a defense against a predator but in competition for mates or other resources.

This new Ankylosaurus is intriguing for various reasons, as it is the most complete ever found in North America. The two main points of interest on a skeleton that paleontologists use to distinguish between species, the skull and tail, are all wonderfully preserved.