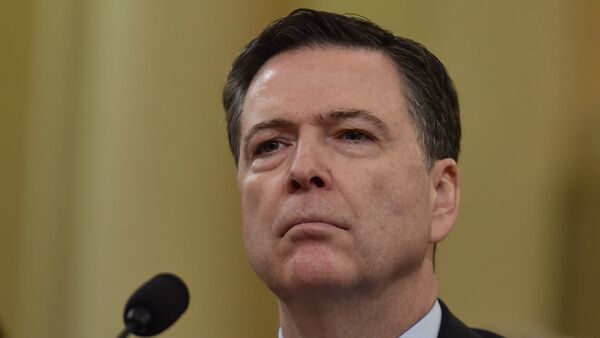 Political Nightmare: Trump Opens Pandora's Box by Firing FBI Director Comey
On Tuesday, the FBI director was fired because, according to the administration of US President Donald Trump, he mishandled the probe into Hillary Clinton’s use of a private email server during her term as Secretary of State. Trump fired Comey based on the recommendation of both Deputy Attorney General Rod Rosenstein and Attorney General Jeff Sessions.

US Senate Intelligence Committee Chairman Richard Burr said in a statement on Wednesday that FBI Acting Director Andrew McCabe is set to testify before the Committee in a hearing on global threats set for Thursday.

Americanist Dmitry Mikheev believes that there is a large-scale struggle against Donald Trump in DC and such a "shake-up" is just the beginning.

"Trump has serious problems with the leading members of his cabinet, which are linked with intelligence and secret services, so this shake-up may be just the beginning, because these services, apparently, secretly sabotage the work of the administration. This also affects foreign policy as Trump can in no way work out a strategy. I think that there is a very serious internal struggle against Trump; and the stakes in it are very high. The establishment thinks that it will be possible to make him [Trump] make some serious mistake and begin the impeachment procedure. A covert war underway has become more apparent, it comes out," Dmitry Mikheev told Radio Sputnik.

The expert expressed doubt that Andrew McCabe will be appointed the head of the FBI.

"These are all the appointees of [former US President Barack] Obama. He [Andrew McCabe] is one of the candidates that Trump advisers, in particular, [his son-in-law Jared] Kushner, recommended be dismissed, clearing the administration of Obama's proteges. But who else could become the head of the FBI cannot be predicted yet as the dismissal [of Comey] itself was completely unexpected. In addition, the director of the FBI must be approved by the Senate, which means there will be an open confrontation in the Senate. And the struggle will result in these hearings in the Senate. The [internal] struggle continues and becomes public, brought to the surface," he concluded.