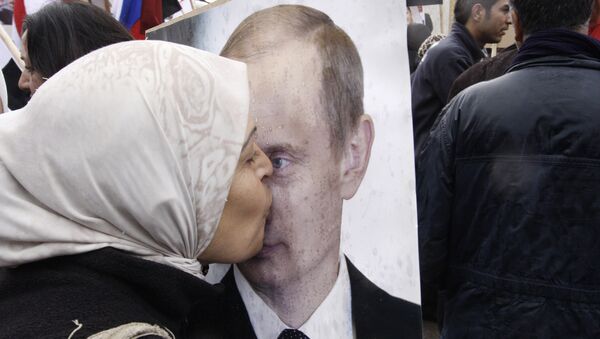 © AP Photo / Muzaffar Salman, File
Subscribe
A young Syrian family in Banyas, near Tartus, has named their newborn son Vladimir Putin Maihub in a sign of gratitude for the support Russia has given their war-torn country, Al Habar TV channel reported.

“I chose this name to show how thankful we are to the president of Russia, to the Russian Army and the Russian people for the military and political assistance they’ve given us in our war against terrorism,” the baby’s happy father, Nurs Maihub, told Al Habar.

Vladimir Putin Maihub was born at one of the city’s maternity hospitals on Saturday.

His father wrapped him in Russian and Syrian flags, which he said was a symbol of “”the government protecting our children.”

The boy’s mother, Salwa Abbas, said she was “happy about this name even though it is hard for me to pronounce.”

What's in a Name? Serbs to Dedicate a Church to Putin
She added that someday she “will learn to say it right.”

Nurs Maihub, 29, is a Syrian army soldier. He and his wife, Salwa Abbas, also have a daughter, Maria.

The civil war in Syria has been raging for almost six years now with government troops fighting against numerous opposition factions and terror organizations such as al-Nusra Front and Daesh, outlawed in Russia.

The nationwide ceasefire regime was introduced in Syria on December 30, 2016.Terrorist organizations are not part of the truce.